When we left the Bay of Fundy National Park on Friday.  It was raining and quite cold.  The drive to Nova Scotia and the area south of Halifax would have been a 5 hour drive for average vehicles, but with a number of stops it took us all day.  Thankfully, the sky had cleared for a bit as we crossed the provincial border. 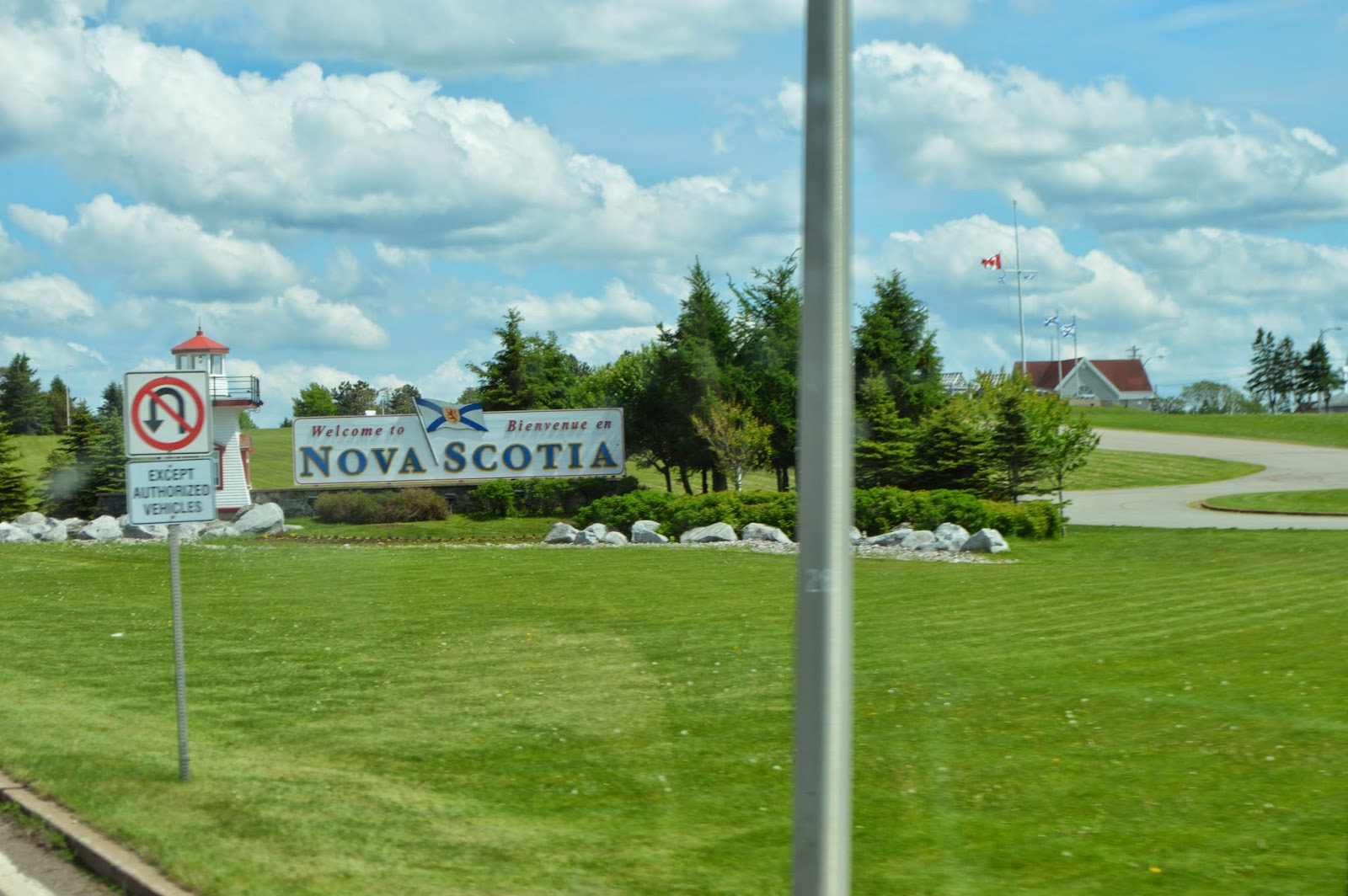 We set up camp in Hubbards, NS at Hubbards Beach Campground.   We pulled in as weekend campers were well into their evening.  The next day we headed 45 minutes into the Halifax farmers market. It was misty and cool again so we were thankful to be inside. 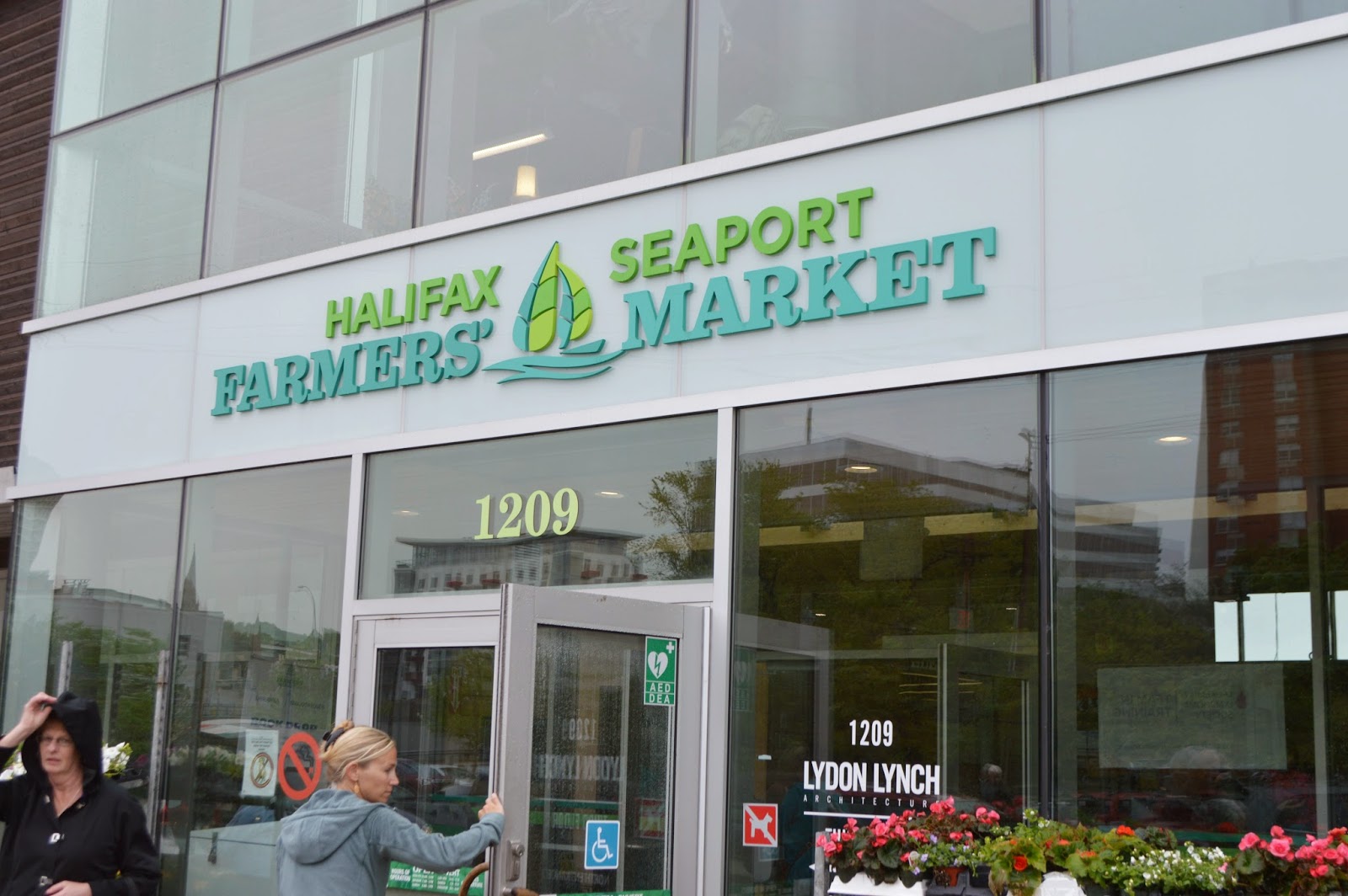 Visited the well-worn Children's Discovery Center (another free admission thanks to the reciprocity agreement from our home-town museum membership).  Katie is inside a giant bubble. 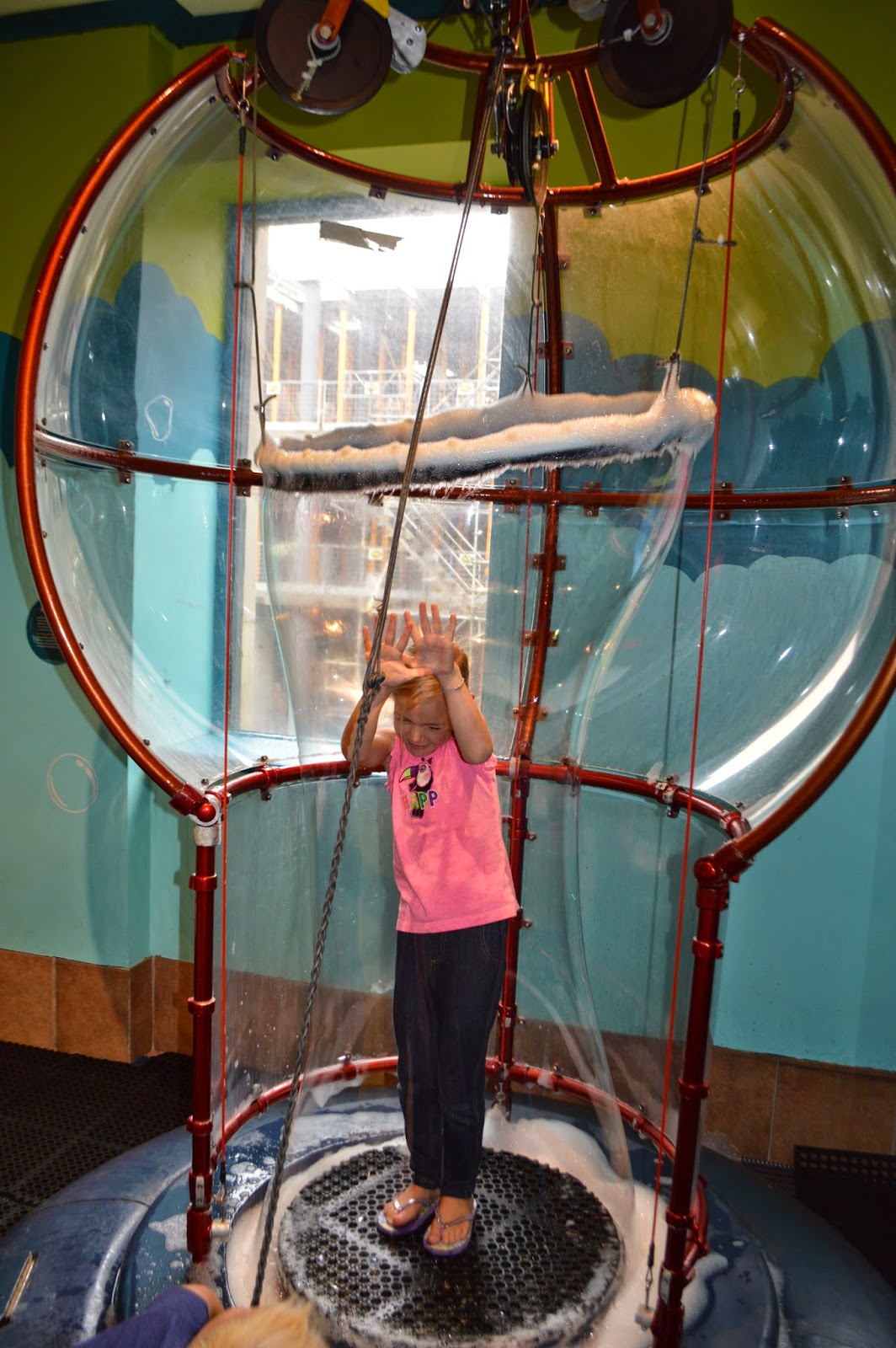 We went to another beautiful Cathedral Basilica  - St. Mary's of Halifax. 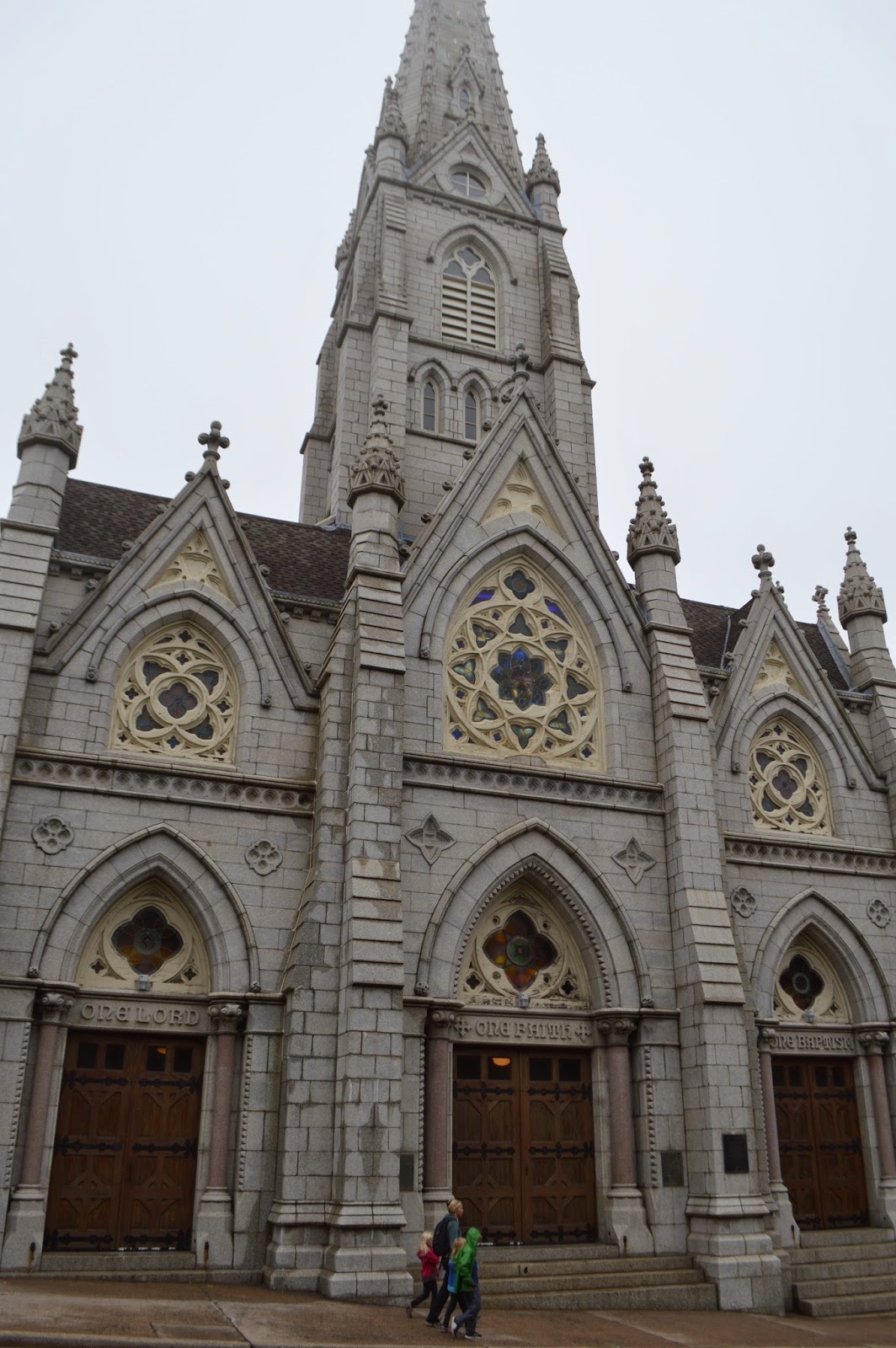 The next AM, was Peggy's Cove day.  Because of it's protective harbor, Peggy's cove is an old fishing village. It is also home to the most photographed lighthouse in Nova Scotia. 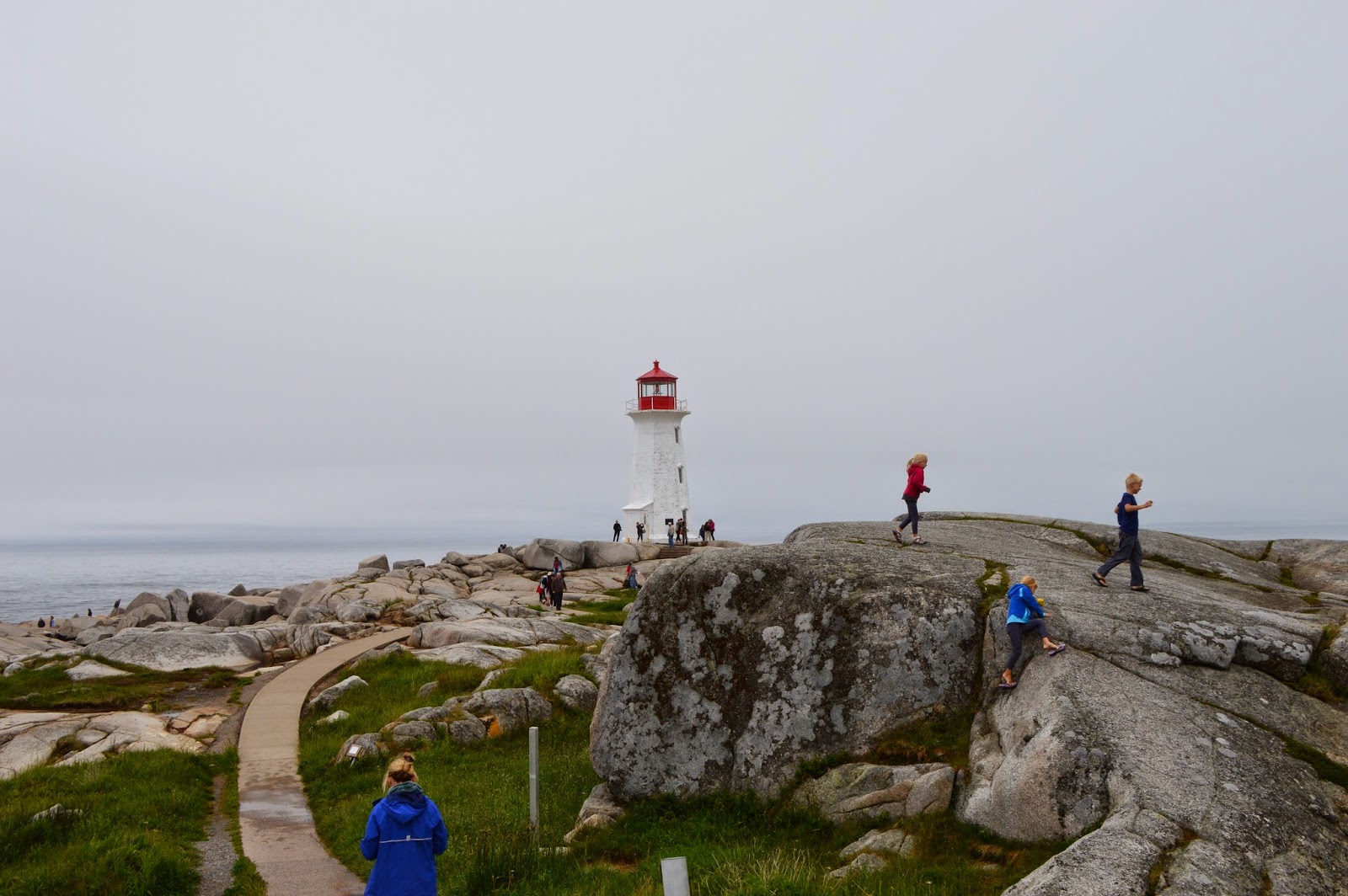 It's one of the few areas we've seen in Nova Scotia that is not flush with pine and hardwoods.  It's very scenic even with the clouds. 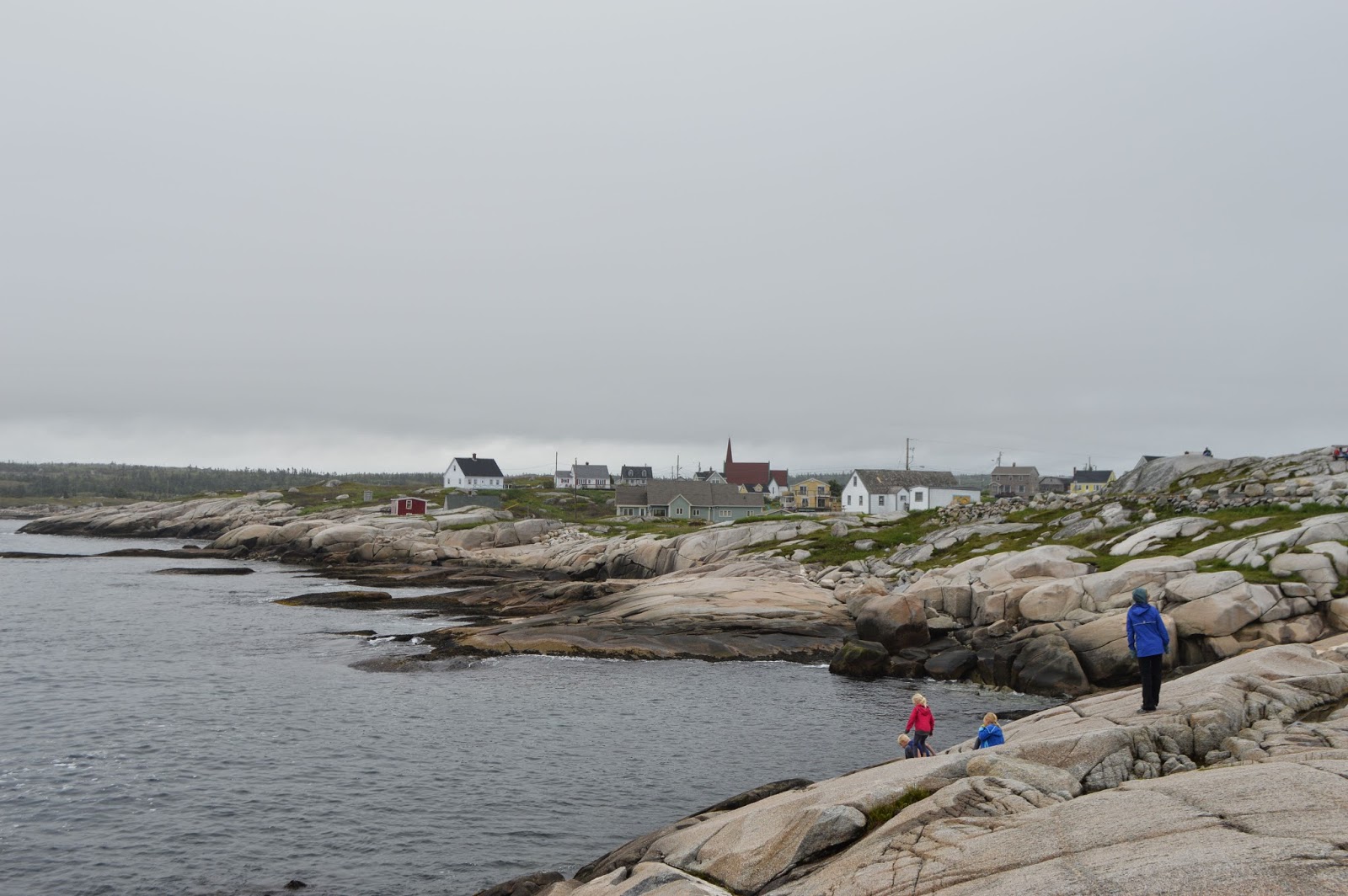 On our third day in Nova Scotia we headed south from Hubbards to Mahone Bay and Lunenburg. Both quaint villages with scenic harbors, restaurants, and shops.  The weather was very cool again (low 50s with wind) so it was a perfect day to spend a few hours at the Fisheries Museum of the Atlantic.  It was Daddy's favorite museum of our trip. 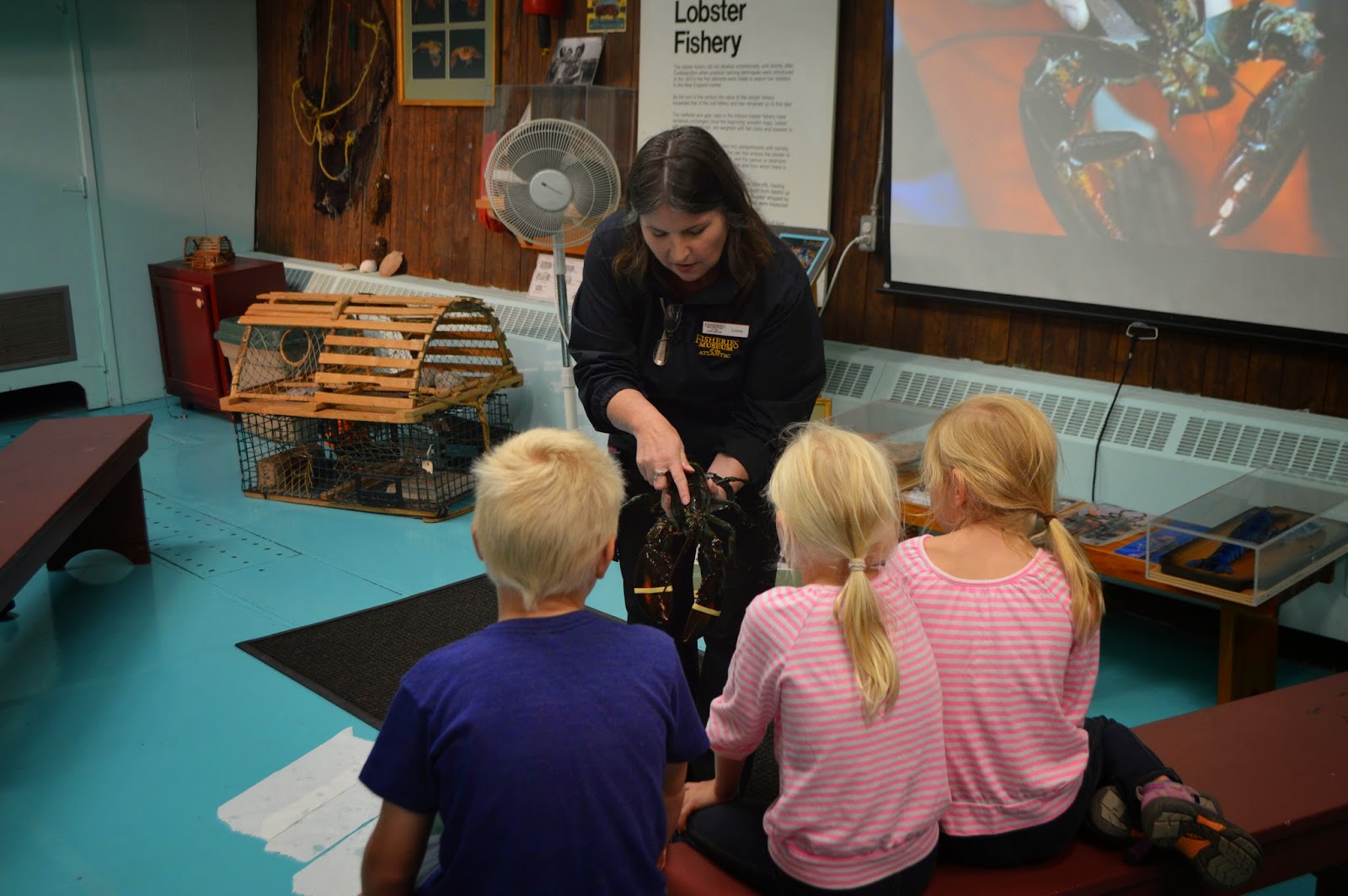 We learned that on very rare occasions, an American Lobster can be blue. It's a genetic wonder from God - kind of like having a twin sister! 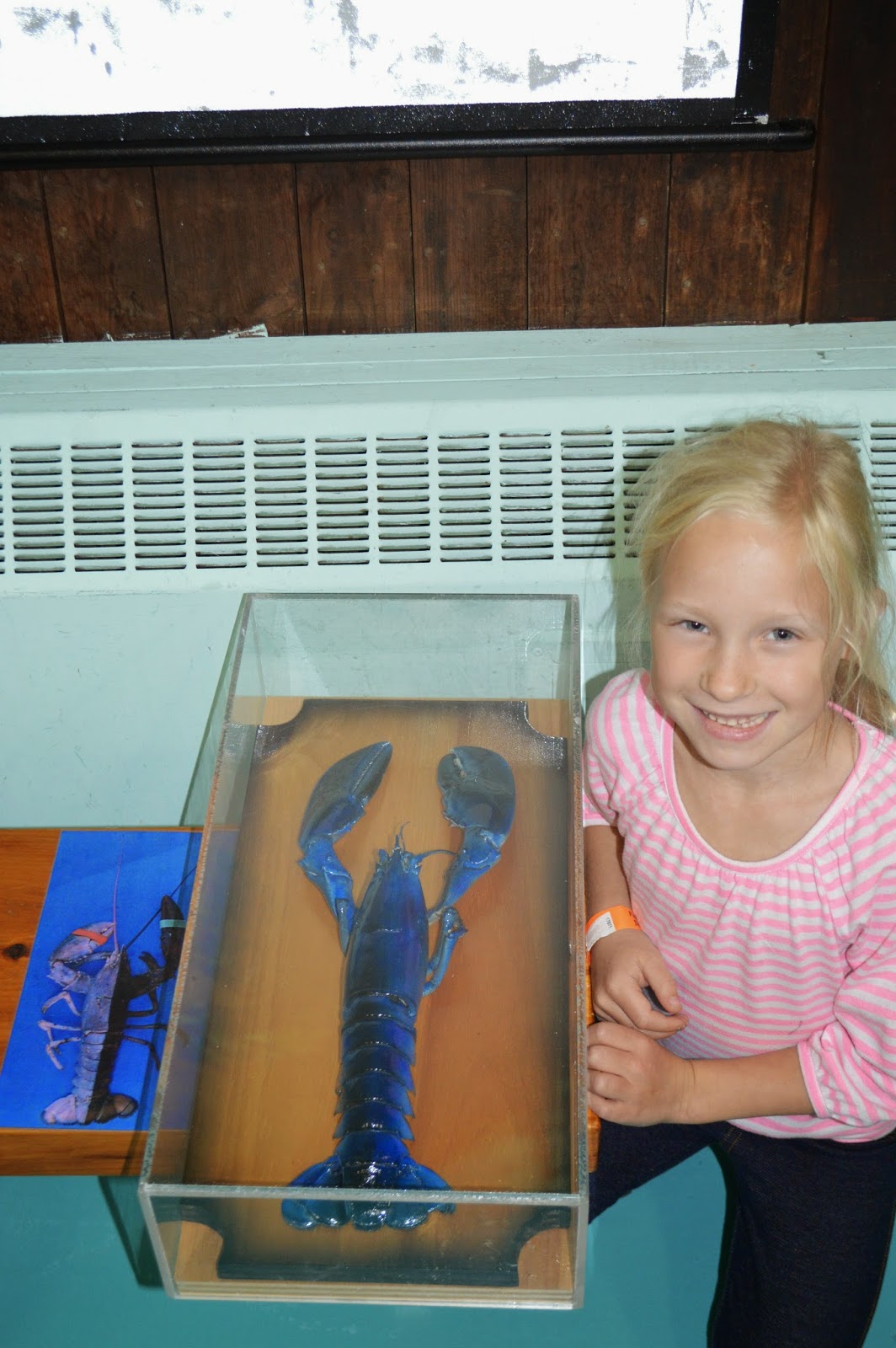 Maybe Daddy liked it because he was able to eat fresh, raw scallops during one of the tours. 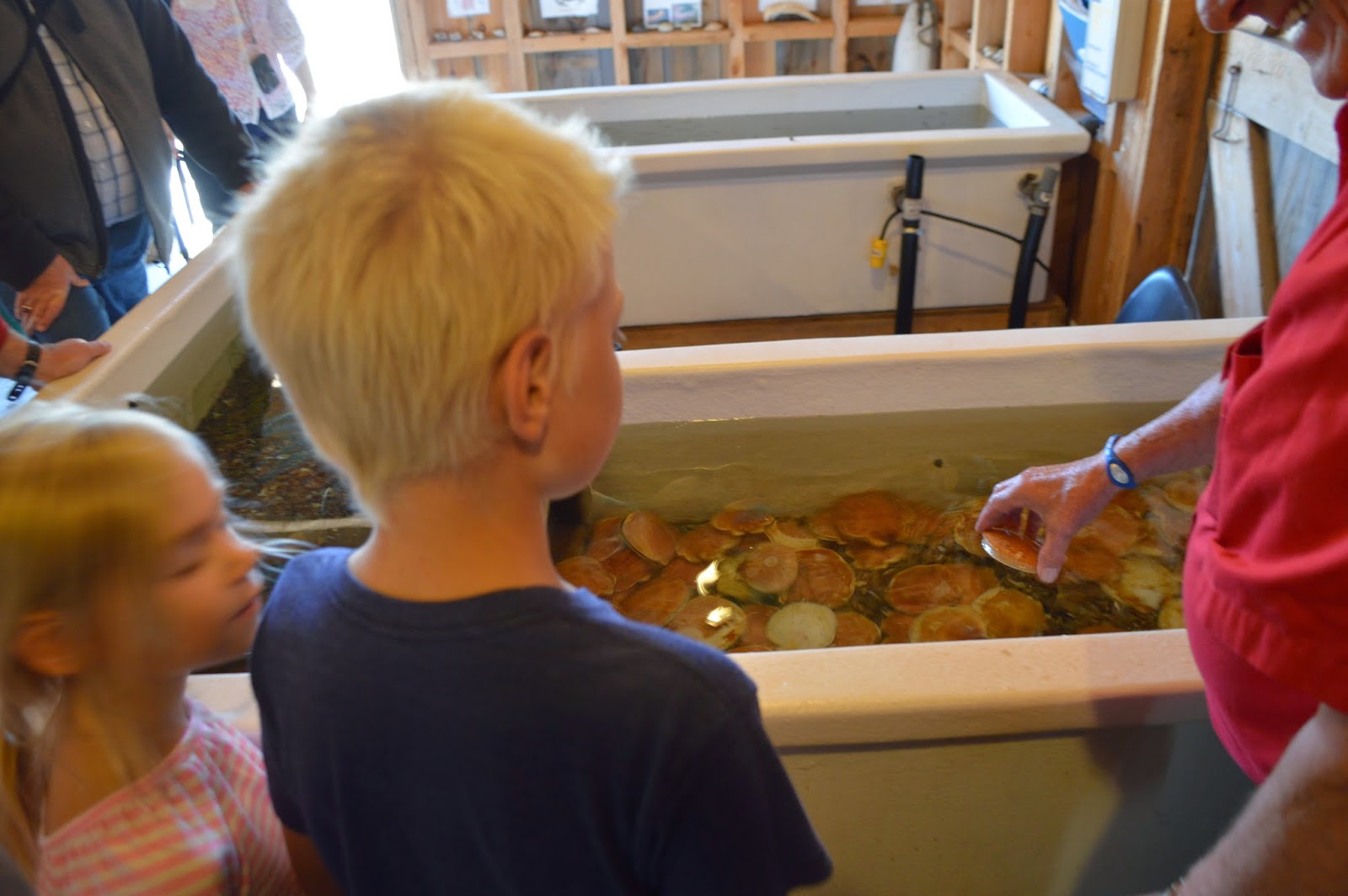 There was a famous fishing and racing schooner from Nova Scotia called the Bluenose.  It was built in the 1920s. It lost only one race in 17 years.  It's days of fishing were numbered due to the introduction of the motorized vessels shortly thereafter.  It's an icon in Nova Scotia. 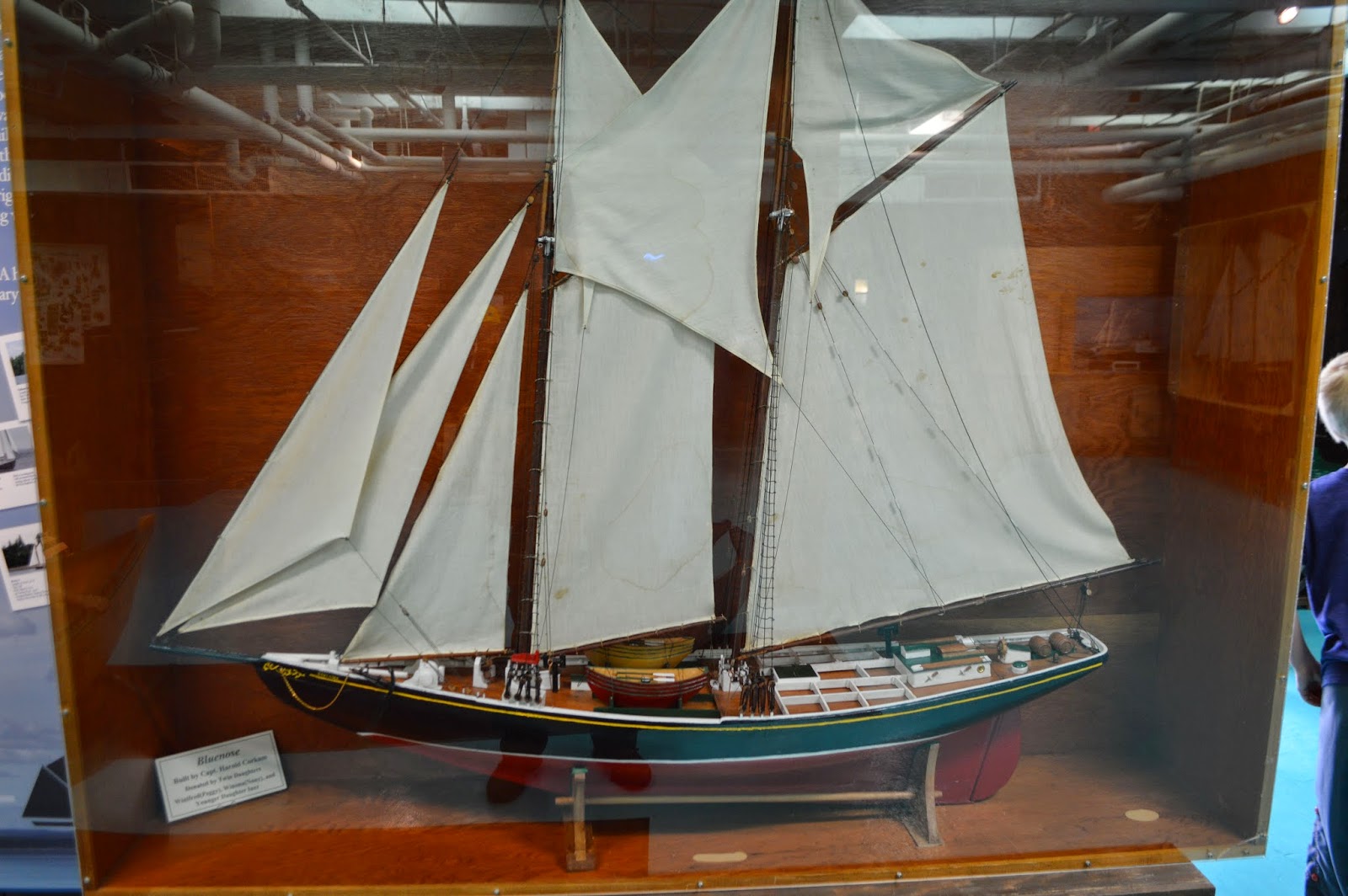 In the 1960s a replica, the Bluenose II, was constructed.   It was in poor shape, and in 2010, a rebuild project was started.  The story of the rebuild is a current political flashpoint in the country. It's all over the news and came up in conversation with locals. It's been a government run project that is over budget by millions and still not officially complete. We found the Bluenose II in the harbor. 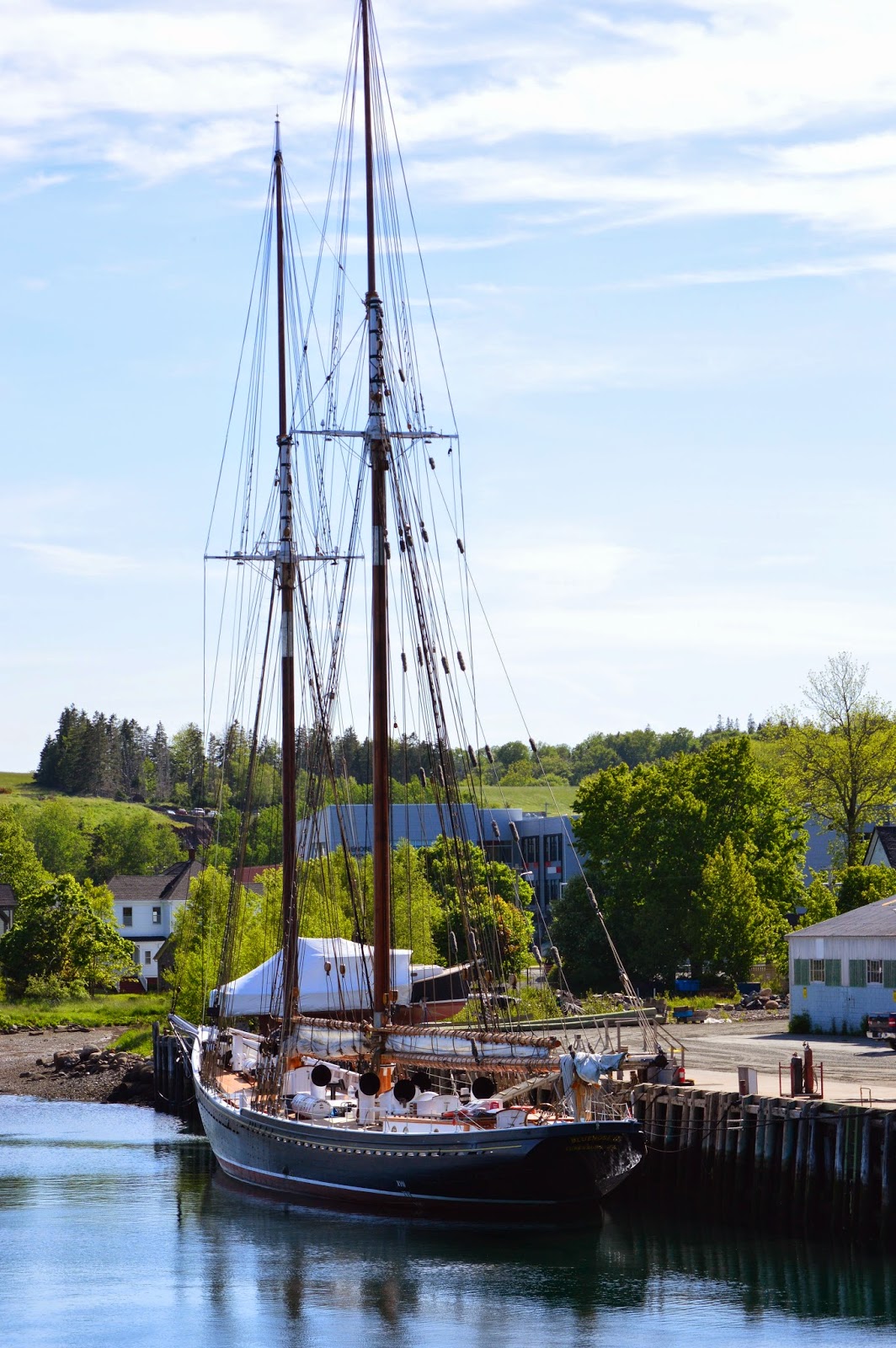 Another harbor shot from Lunenburg. 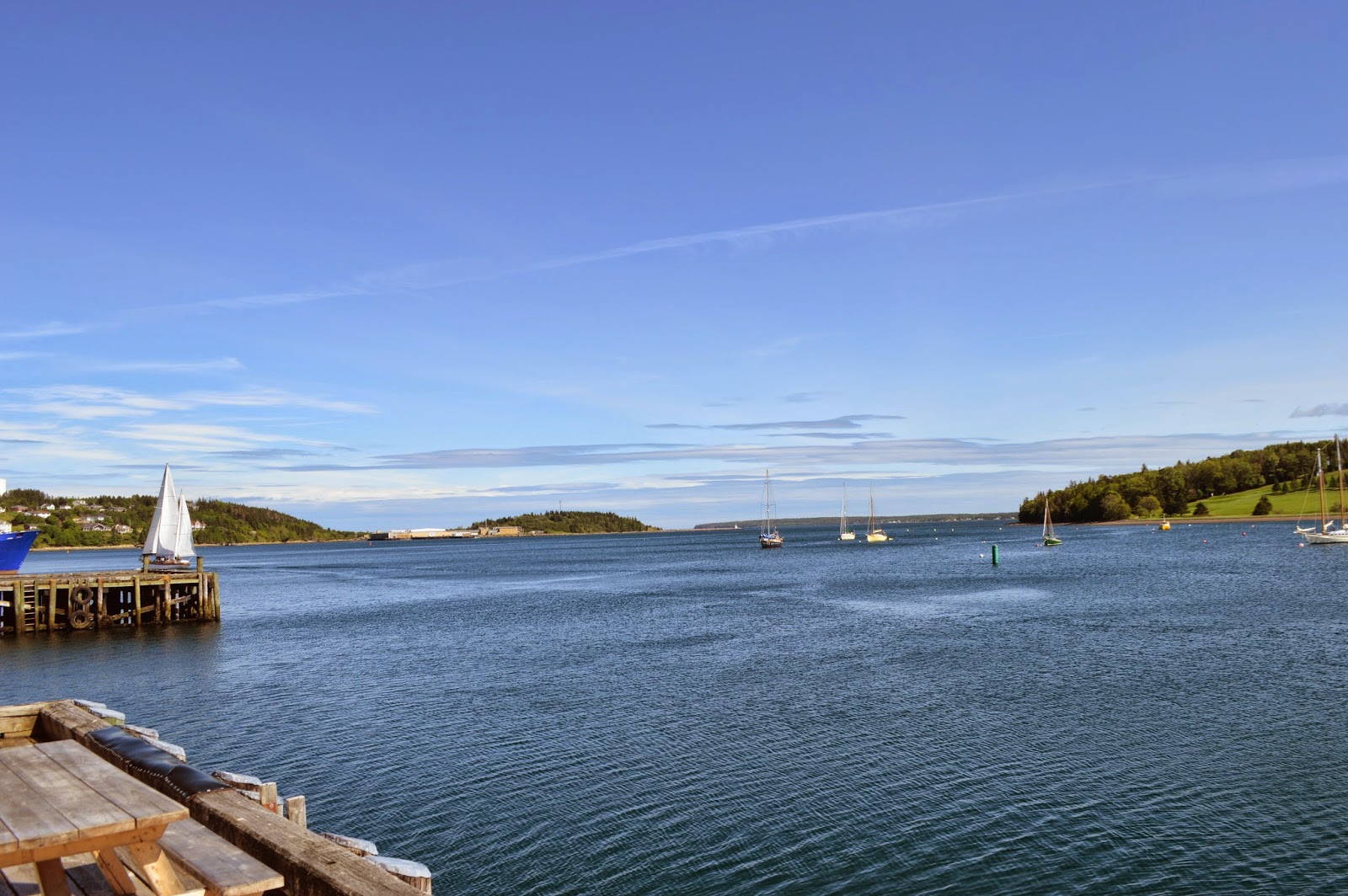 The campground is not our favorite, but it's centrally located and the playground has a fun "line". We can't call it a zipline because it's requires more than gravity. 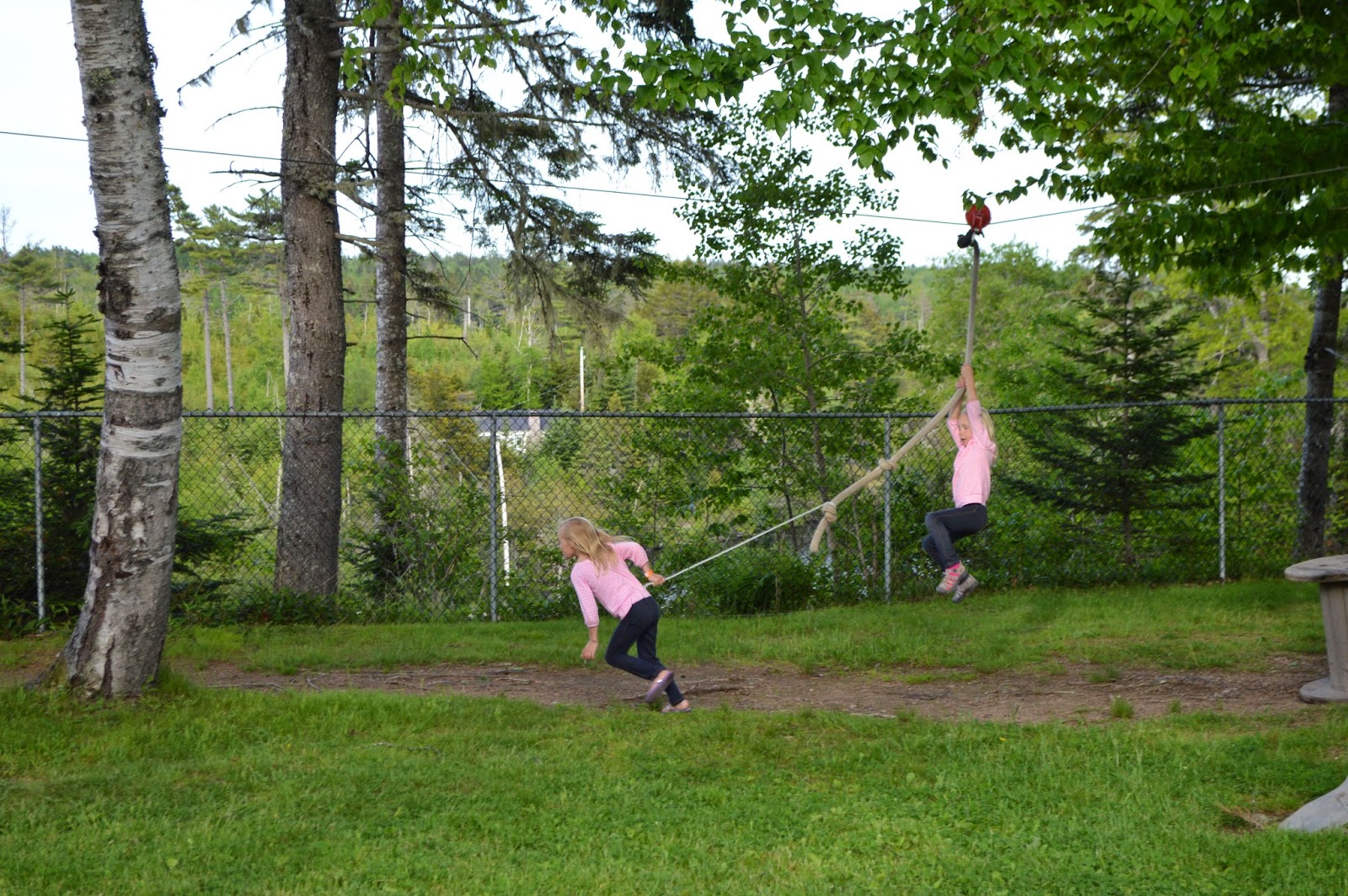 We had replaced the four "house batteries" before we departed on our venture. It was time to replace the two "chassis" batteries as the cold weather seemed to have taken their last bit of life. 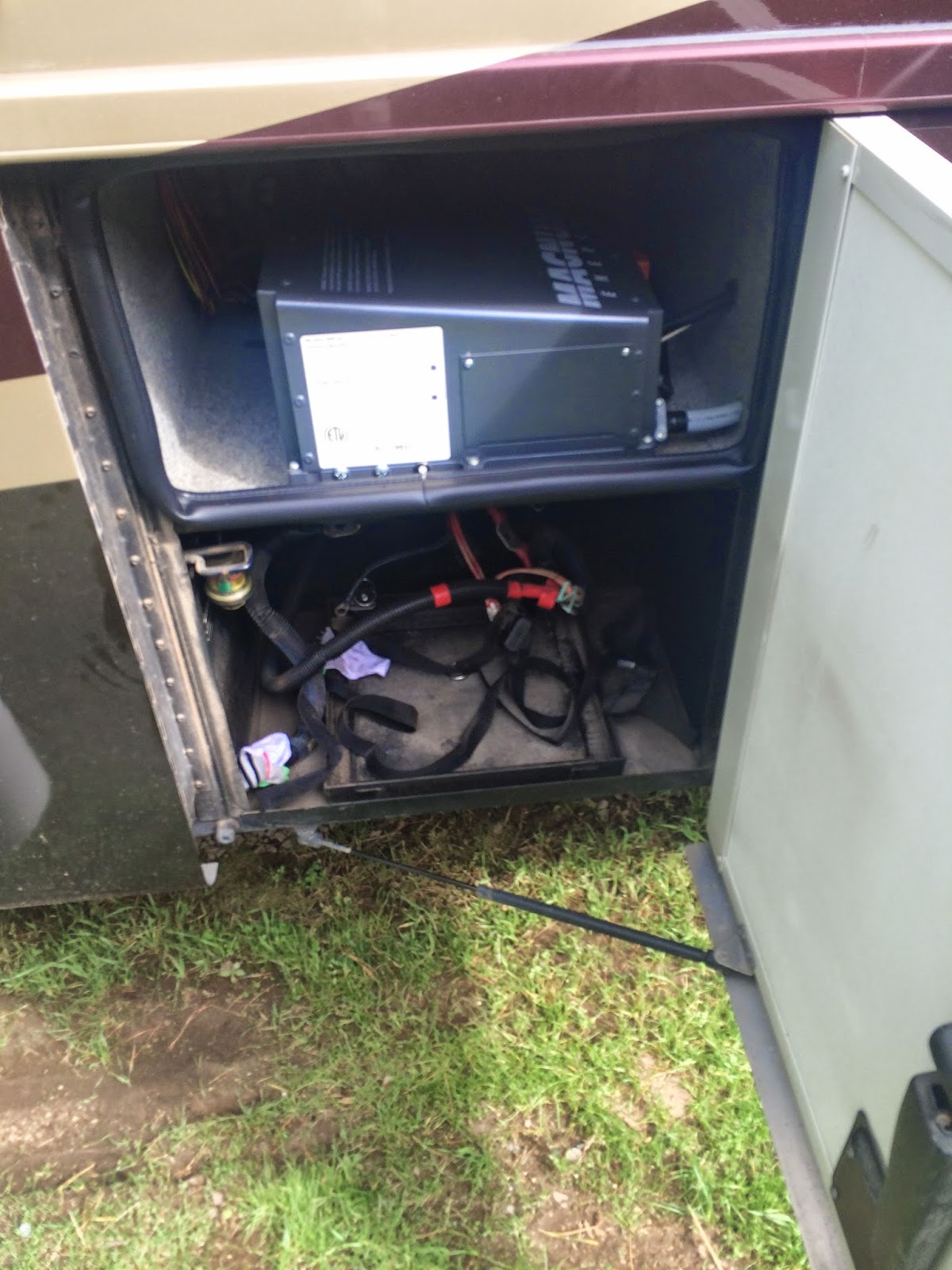 We won't talk about what happened, but we ended up in the Cummins shop in Halifax getting a new alternator.... 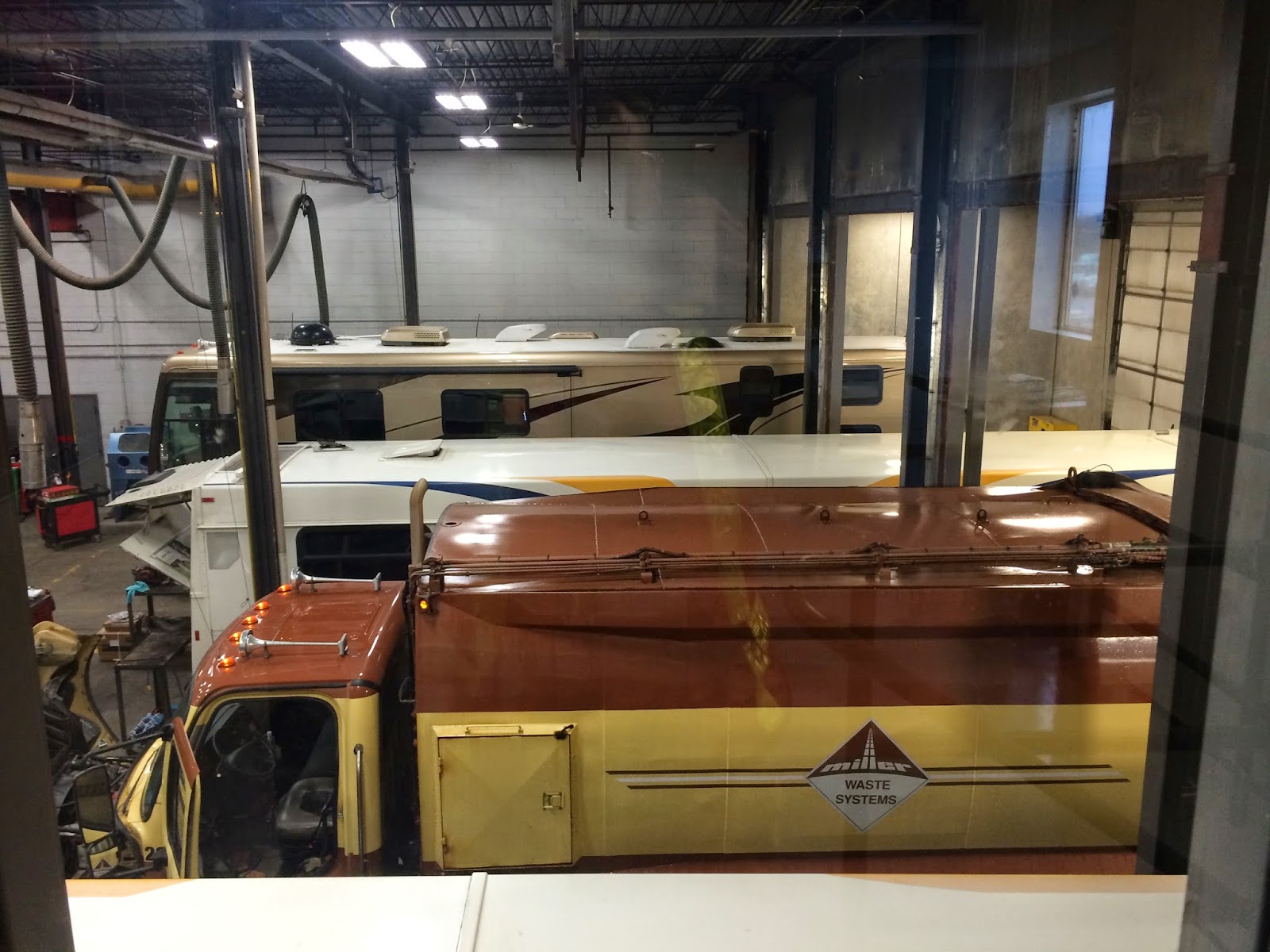 We stayed the night for free outside the Cummins shop.  We had planned to head north to Cape Breton, but the weather forecast called for 15 degree warmer temps in Halifax than the north, so we found a very nice local park in Dartmouth to spend the next couple nights.   Because it was only ten minutes from the shop, we pulled in at 8am.  Normally, campgrounds have a check-in time around noon, but it's off season and folks at Shubie Park were very welcoming.

We visited the Halifax Citadel and enjoyed the mock (loud!) cannon firing. 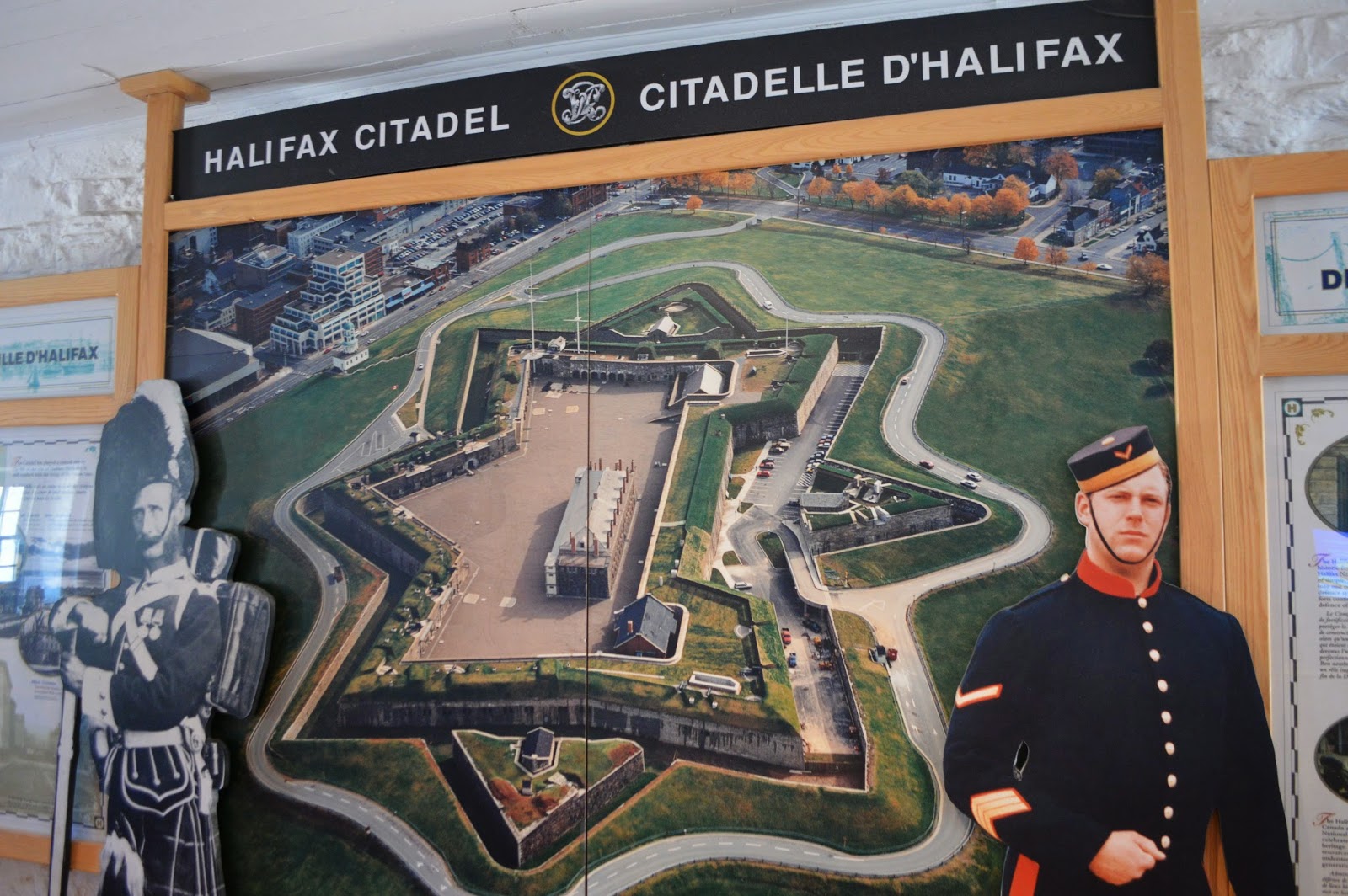 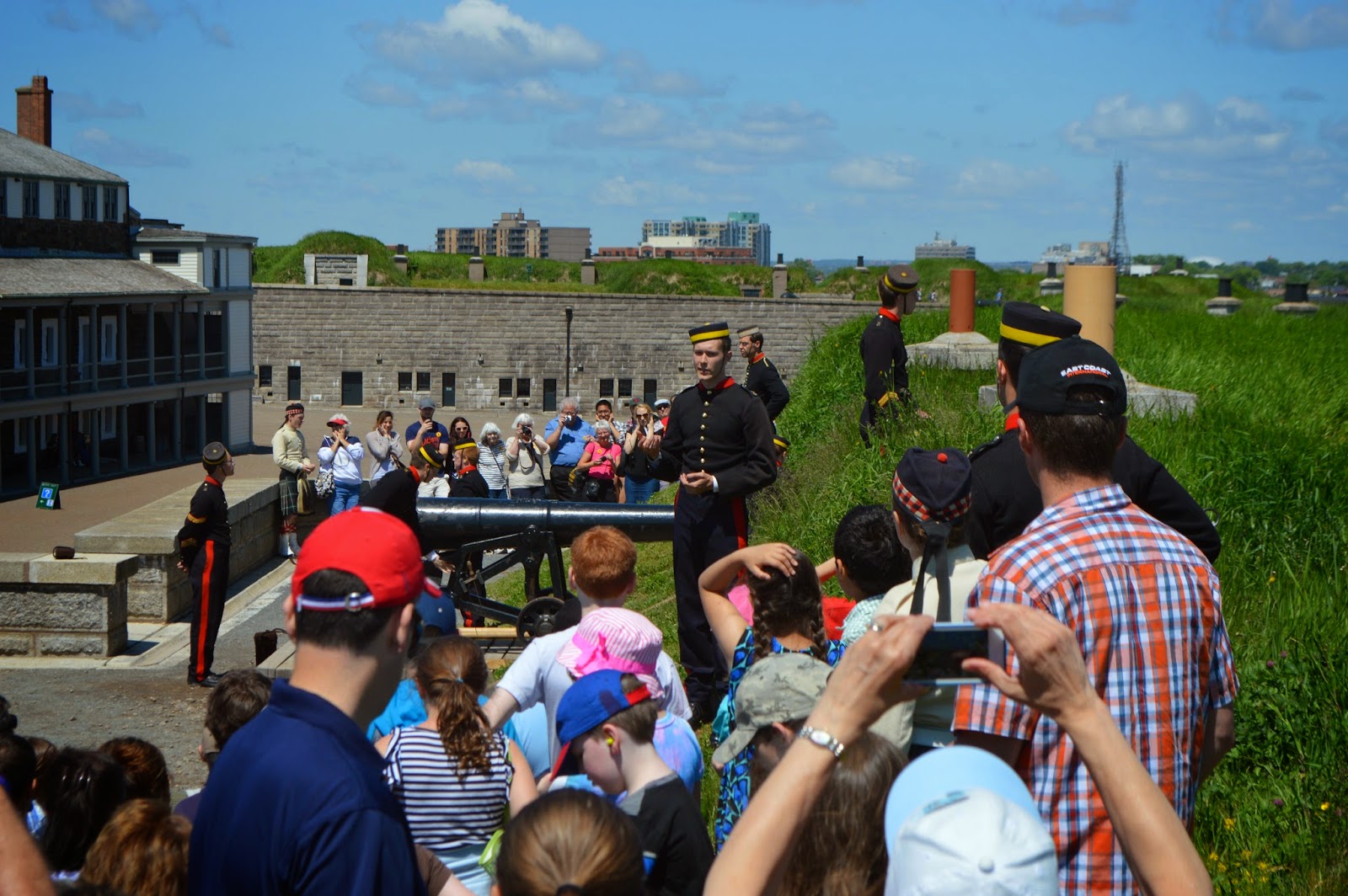 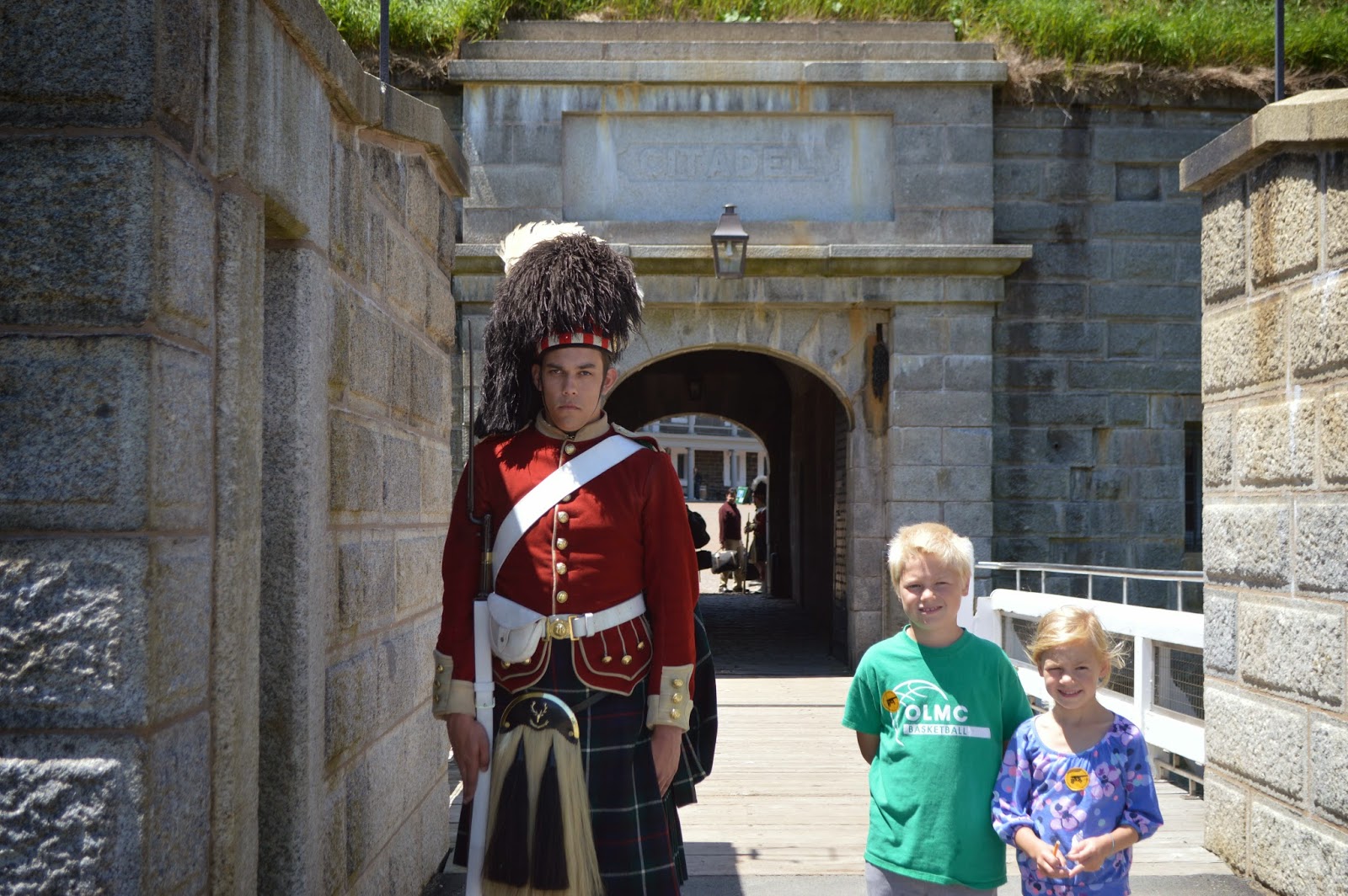 And walked the Halifax waterfront with clear skies and high 60s 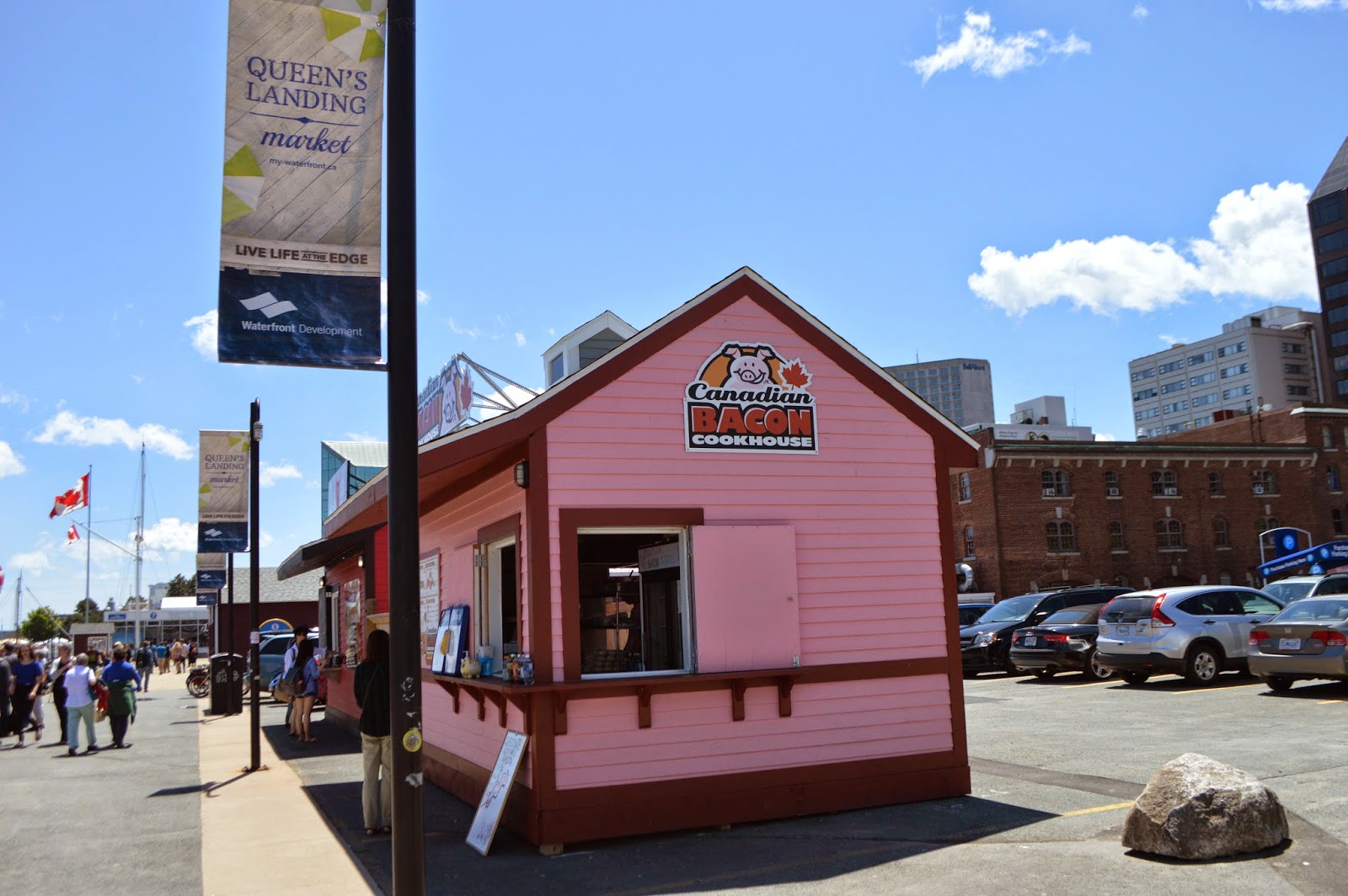 The next day we had one of our first "down days" in a long time. We didn't leave the park and spent the day on school, biking (amazing set of trails around this park), tennis, Wii, and of course the playground. 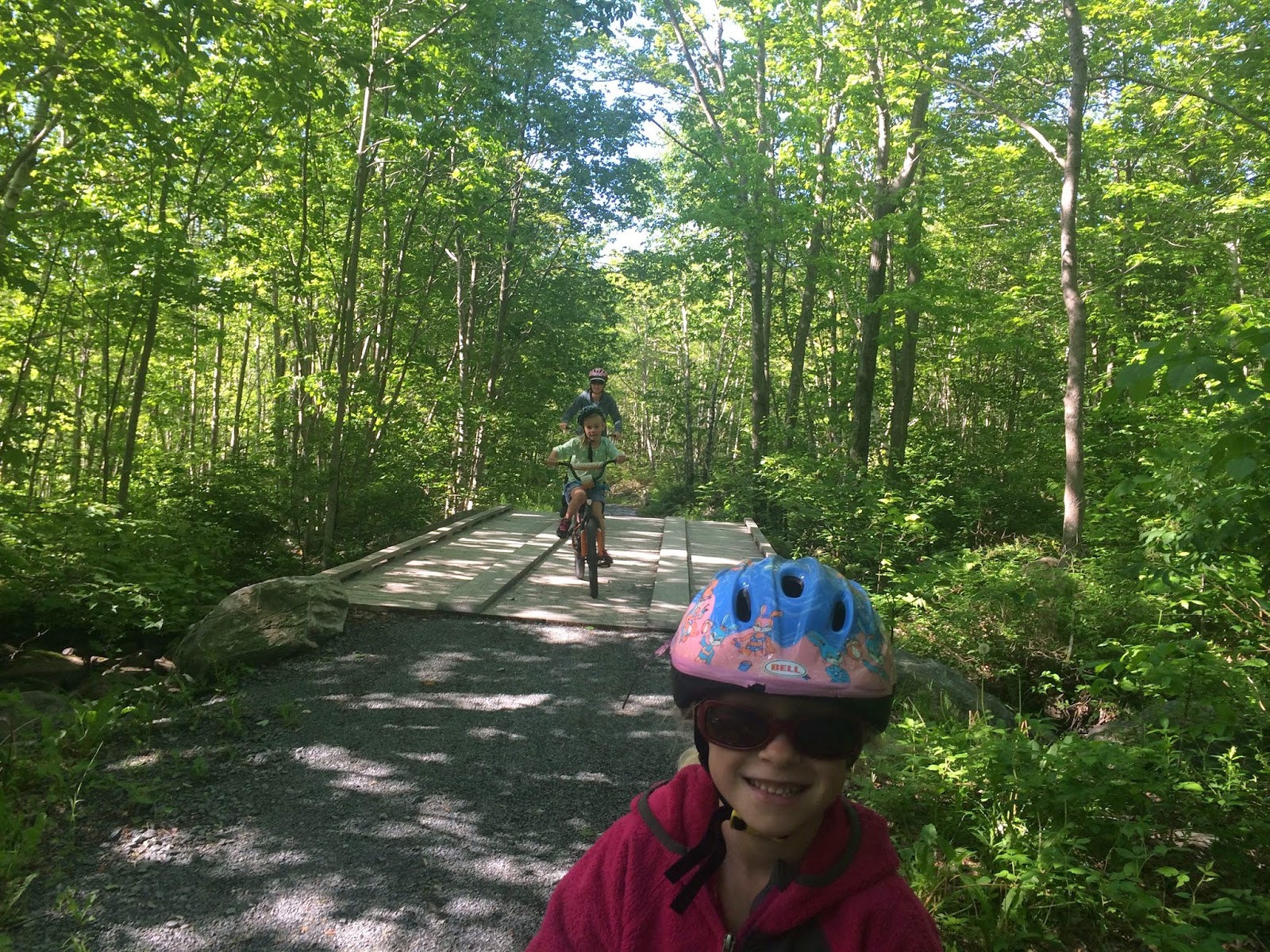 The drive to Cape Breton meant crossing the Nova Scotia mainland and then heading north up the western coast on the Ceilidh Trail.  The day was cloudy and cool with a stiff headwind. We arrived in the Inverness area around 3pm.

We visited the only single malt whiskey distillery in North America (technically there are two others but they are less than 10 years old so they don't yet have a product).  We had not heard of Glenora before coming to Nova Scotia, but it was an informative tour on picturesque grounds - it turned out to be a private tour because once again we are in Off Season!! 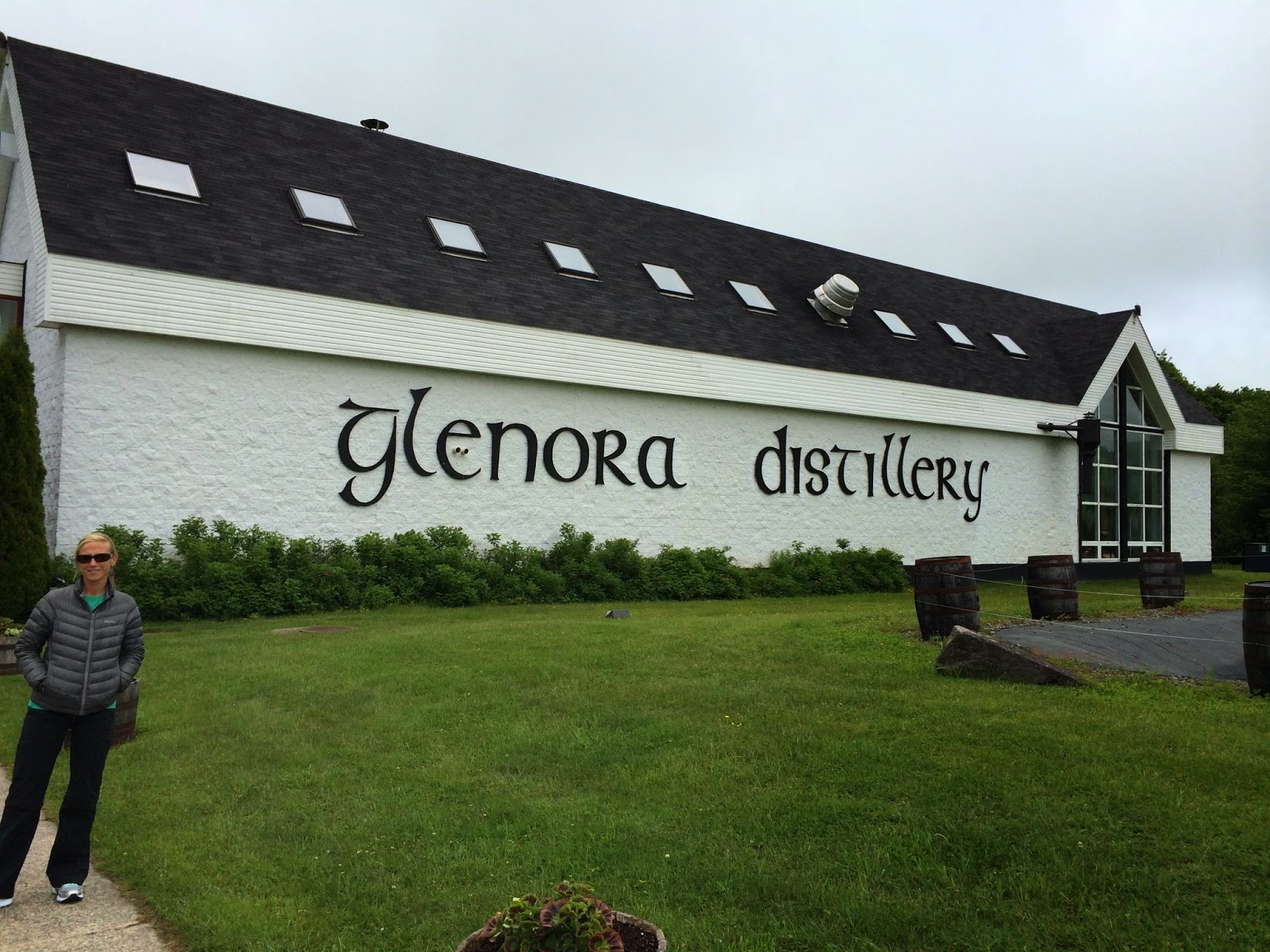 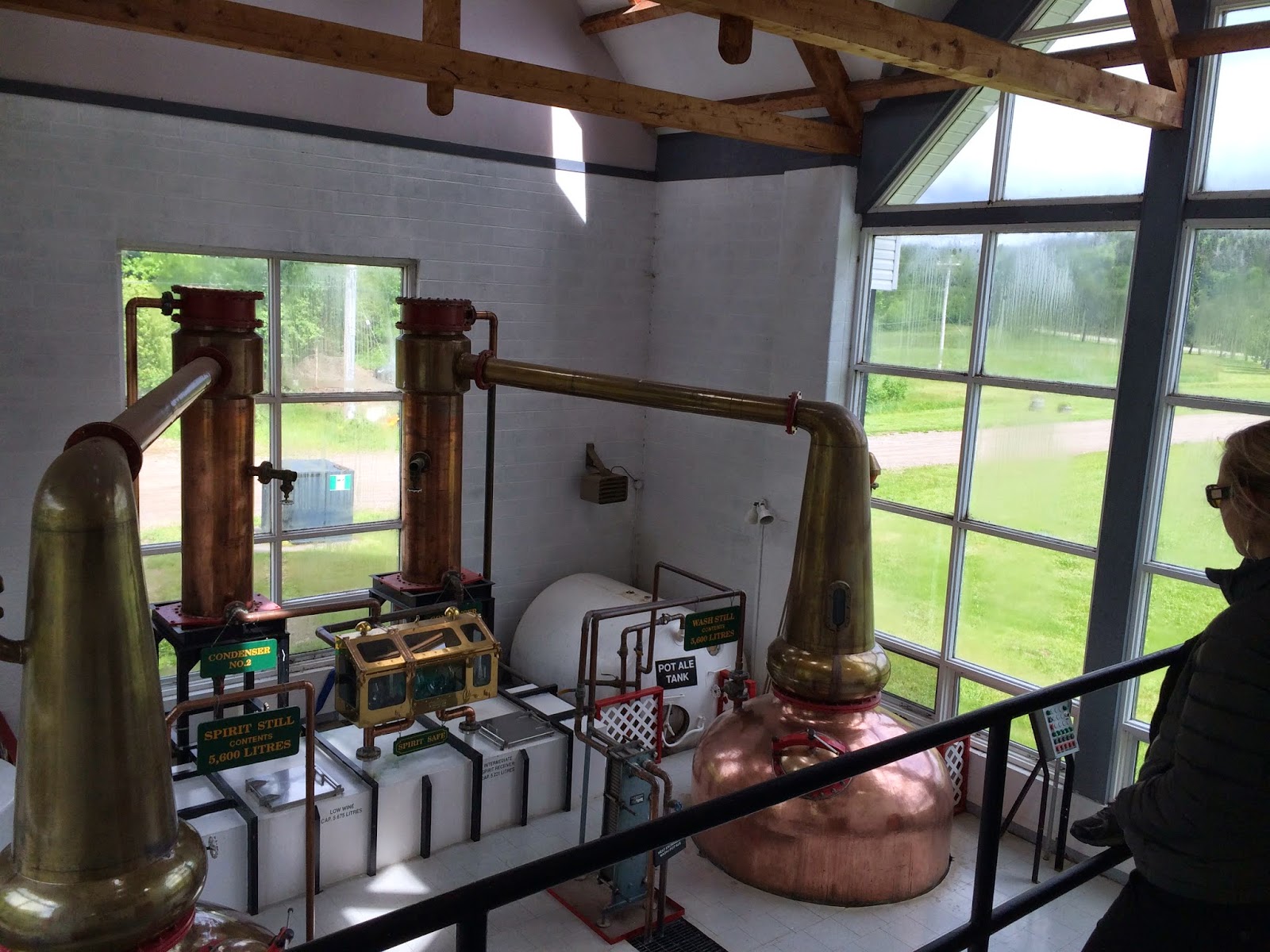 Sunday we headed south with the jeep to spend time in a few places we had passed on the Ceilidh Trail.  In this area, you feel as though you are in Scotland both from the people and the countryside.  They still teach Gealic in the local schools. Architecturally St. Margaret of Scotland was quite different from the Halifax Basilica last week, but warm, and friendly.  They said the Lord's prayer in Scottish Gealic. 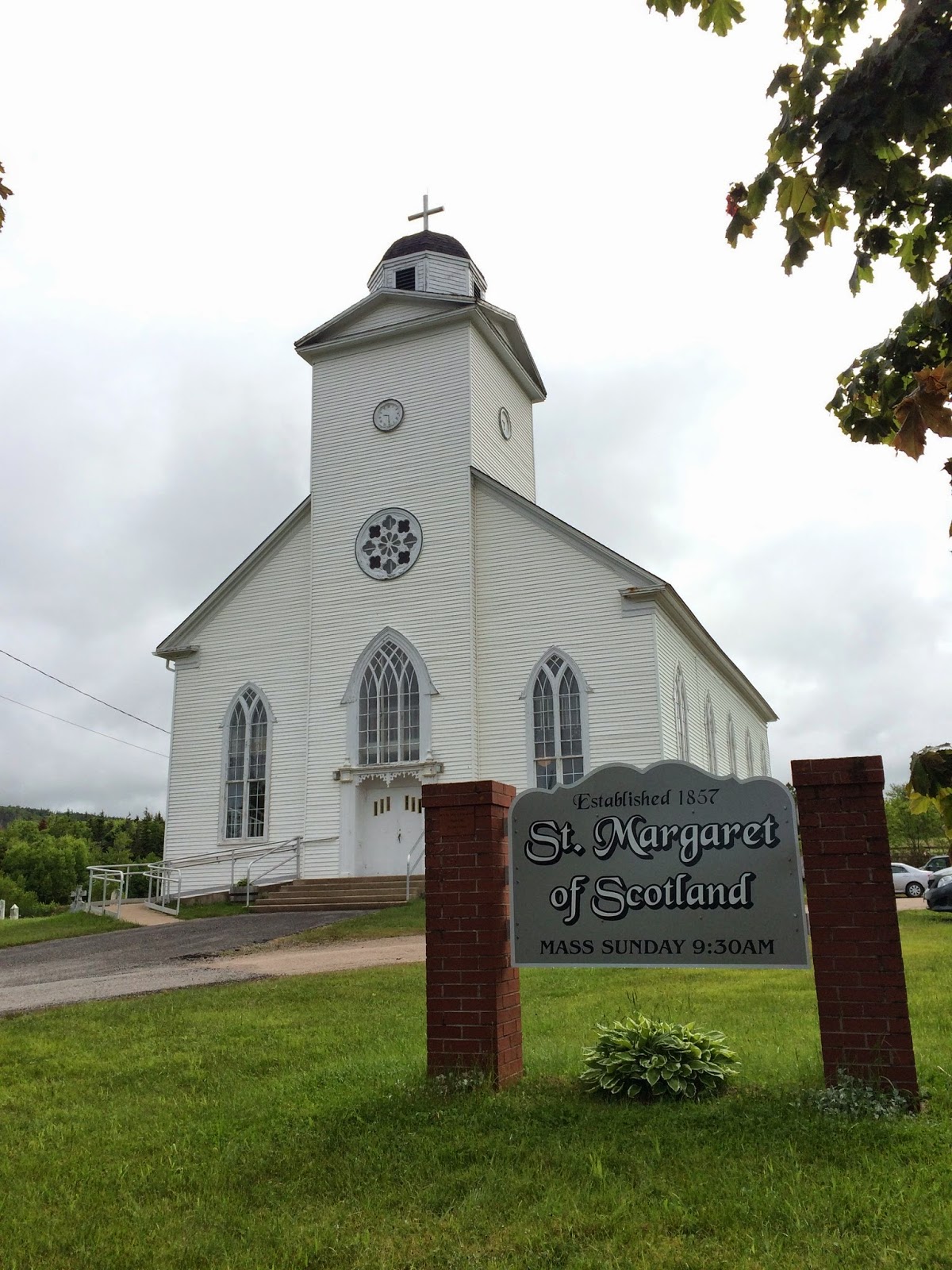 We decided to try finding a coastal route to drive the 20km back to Mabou Bay.  It began as poor gravel but turned to mud and looked more like logging or 4 wheeler trails.  Lesson - once a road starts to deteriorate, it generally doesn't get better. As mentioned, they've had a lot of rain. Almost two hours later when we emerged, we were all glad to be back on pavement and are done "exploring" Nova Scotia back roads for a while!


We happened upon a local Harness Racing track with free Sunday admission.  Another new experience! 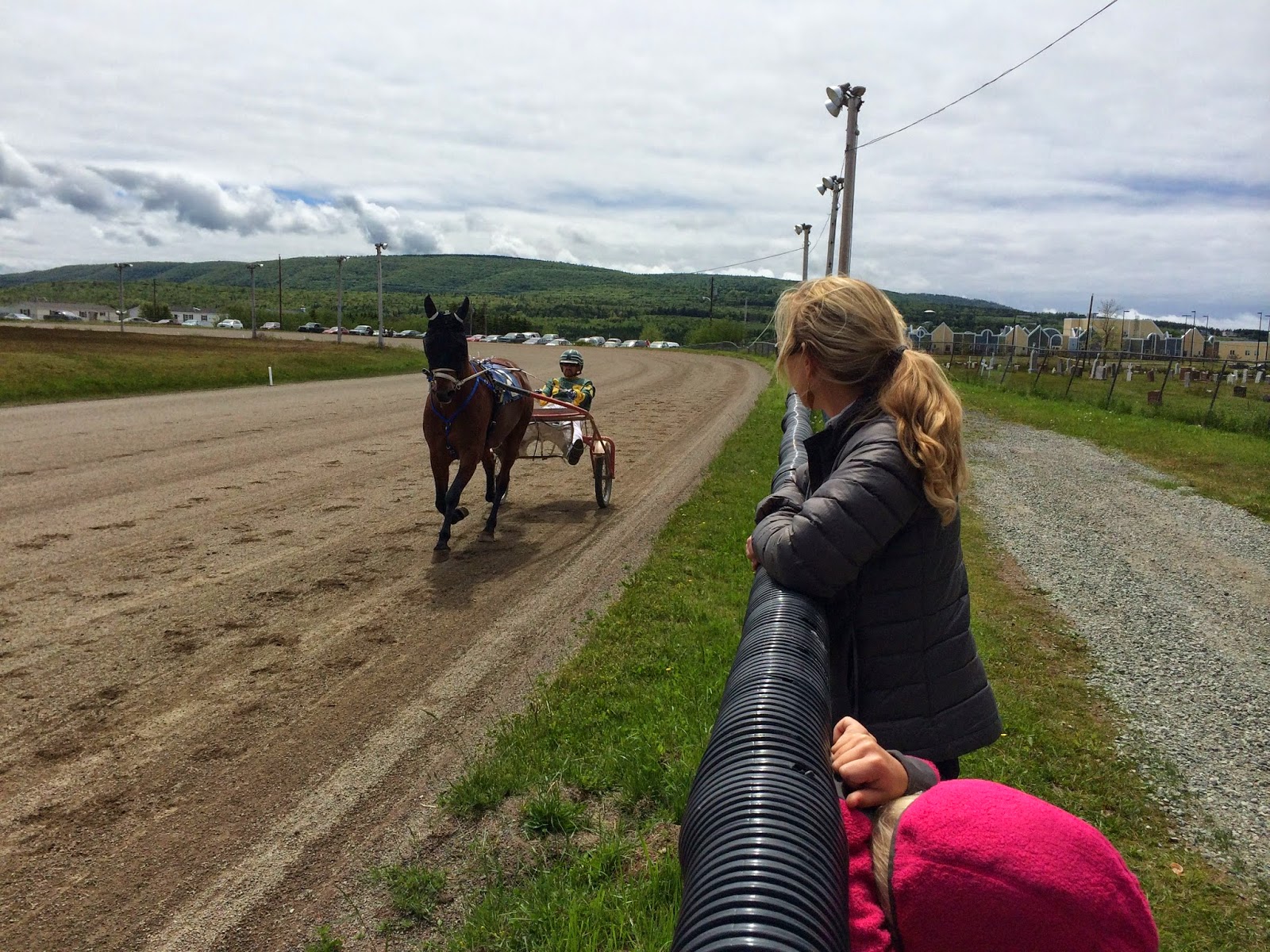 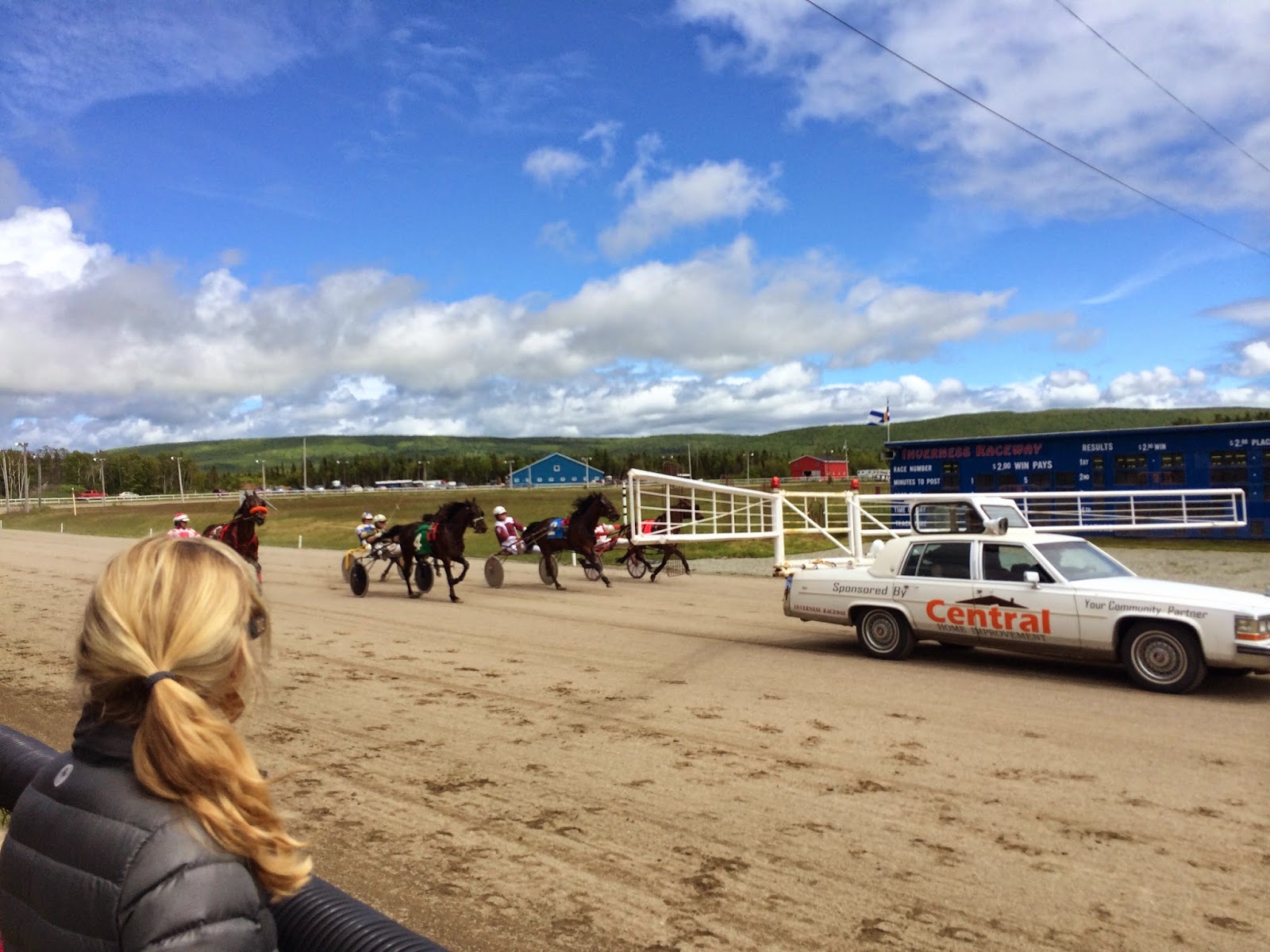 The beach in Inverness was full of sea glass! 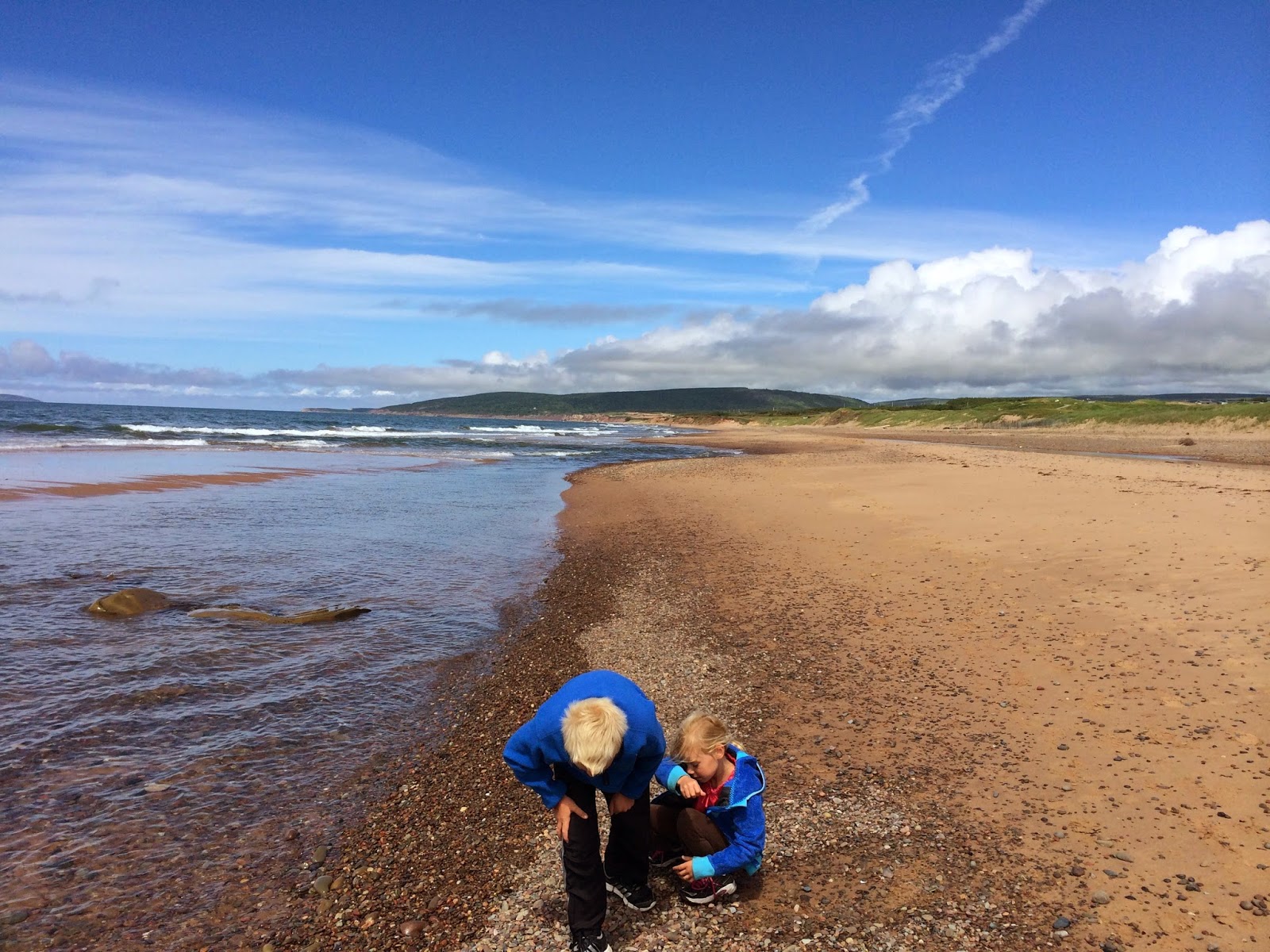 And to top off our day on the Ceilidh trail, we attended a traditional "Ceilidh" which wiki defines as a traditional Gaelic social gathering. Isn't that called a pub?  Either way, it's a fun time and live music doesn't get any better than a fiddle and piano. 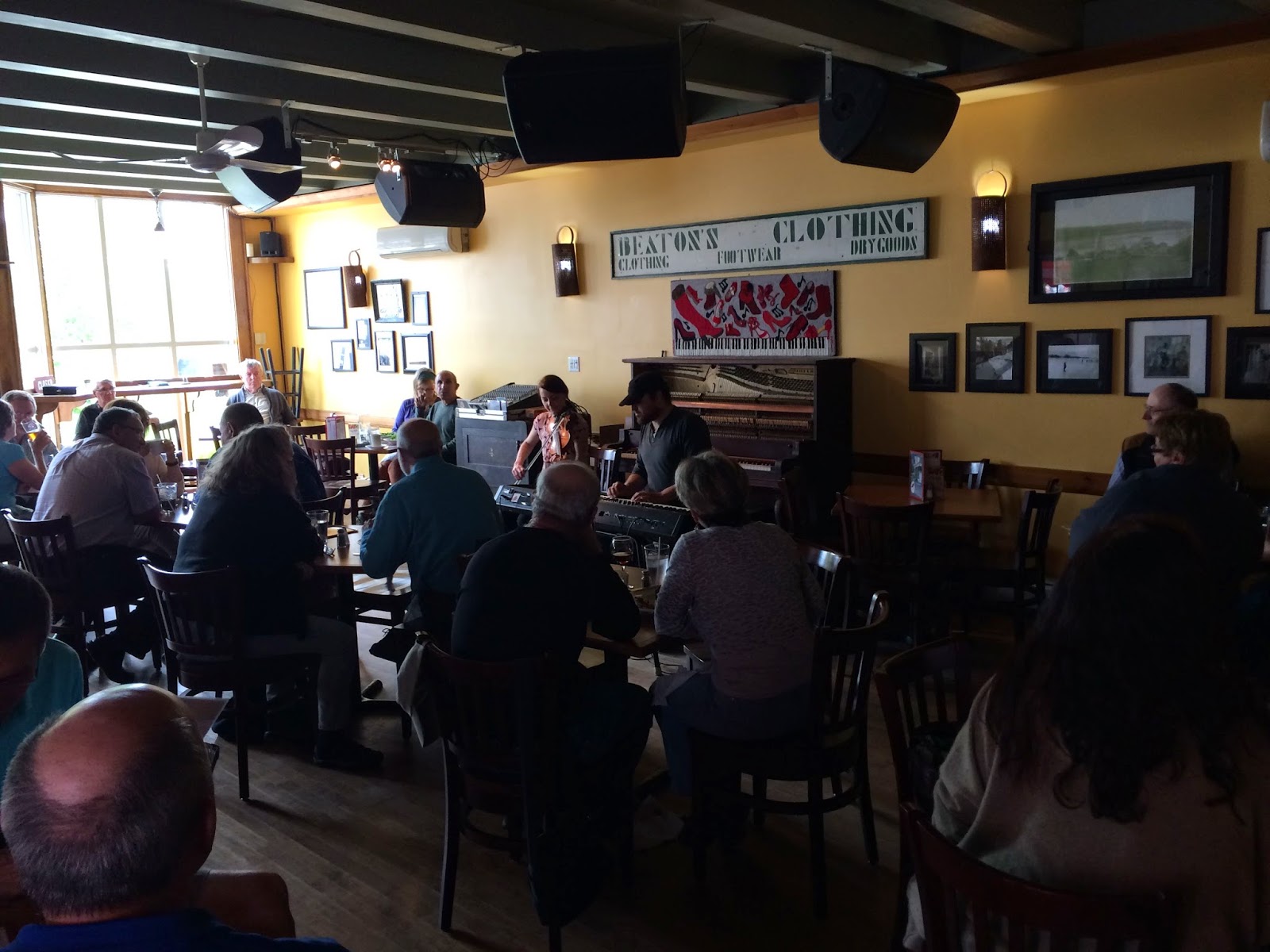 And an amazing sunset just out the door of our campsite. 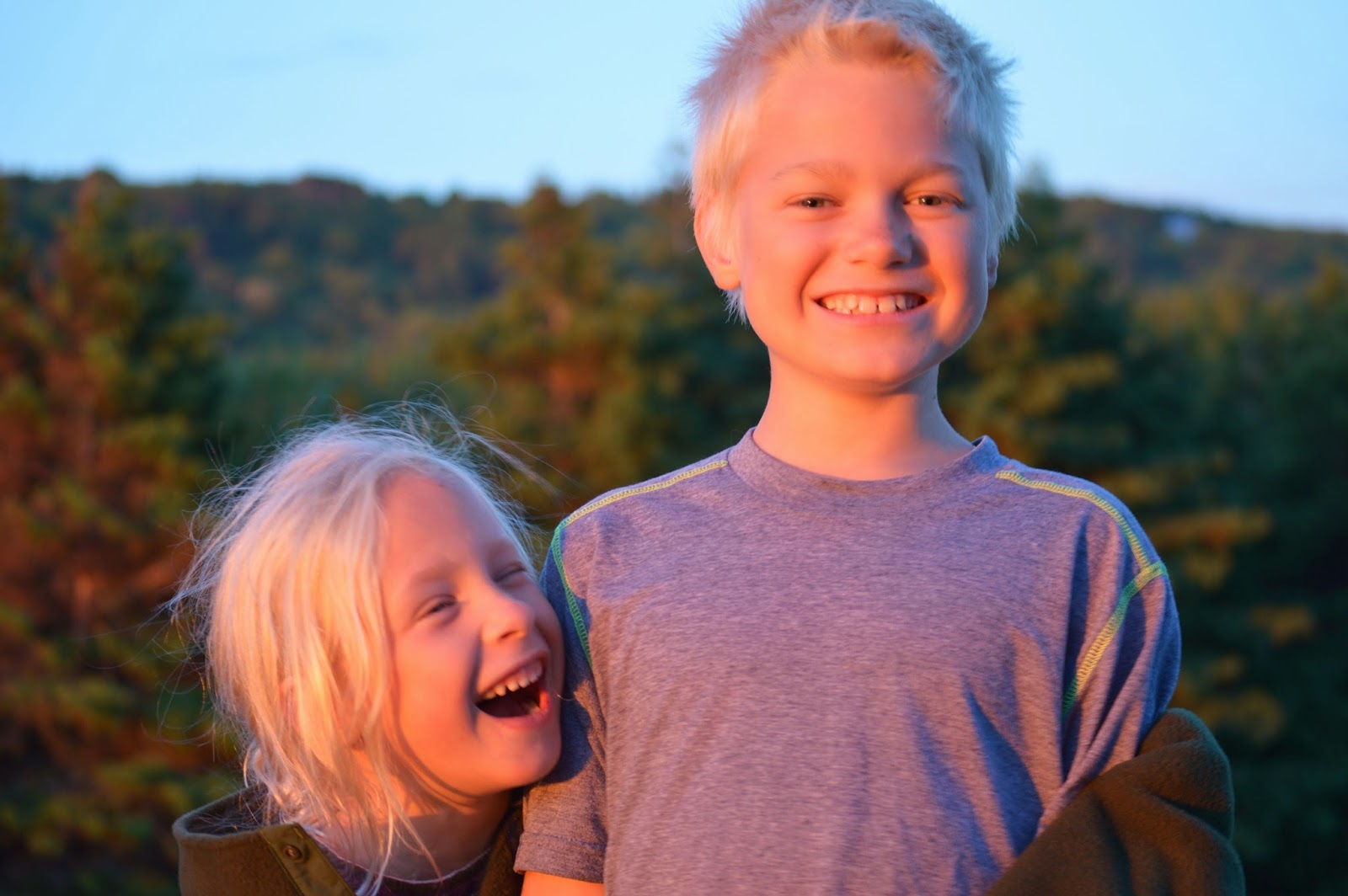 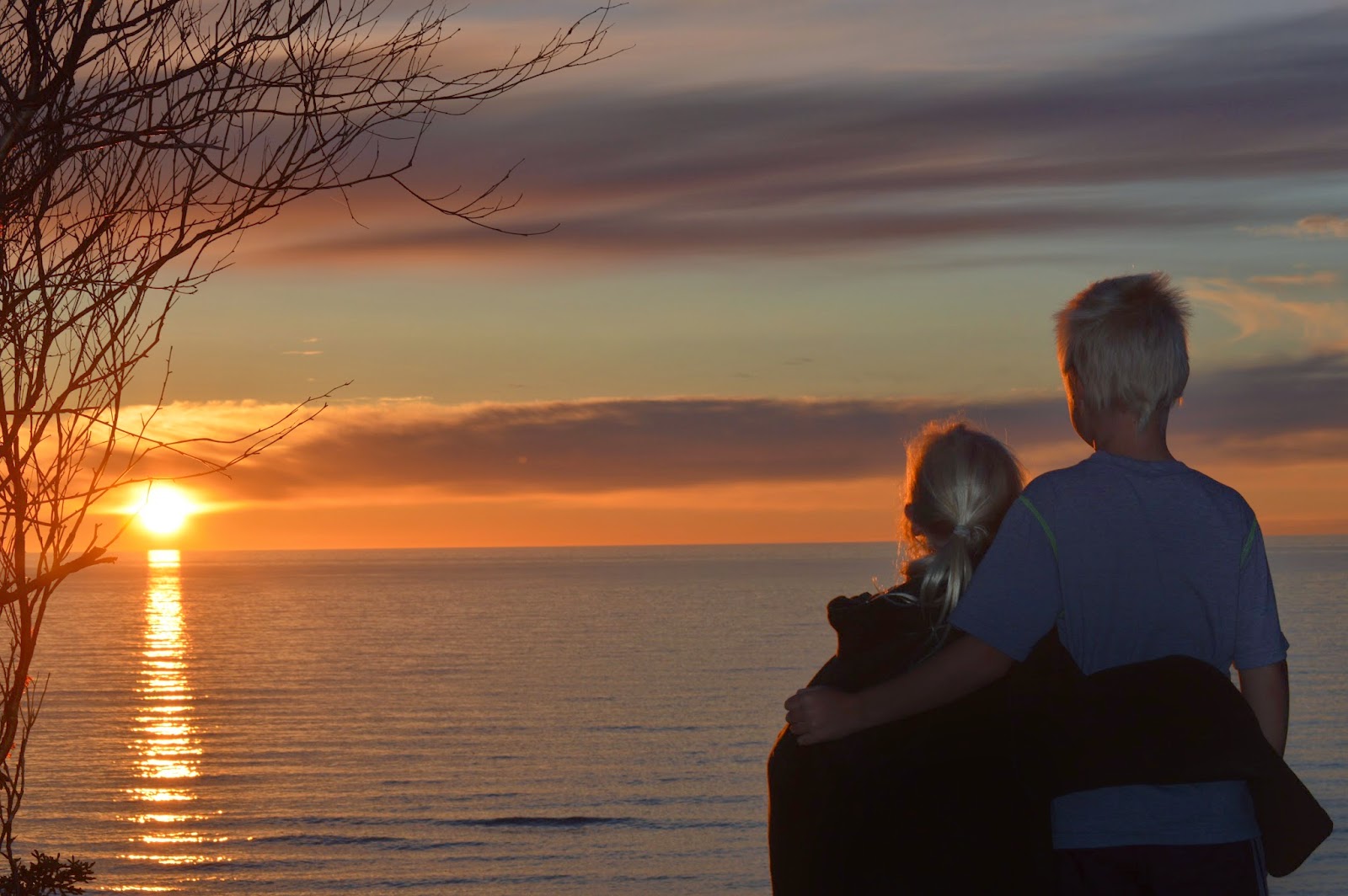 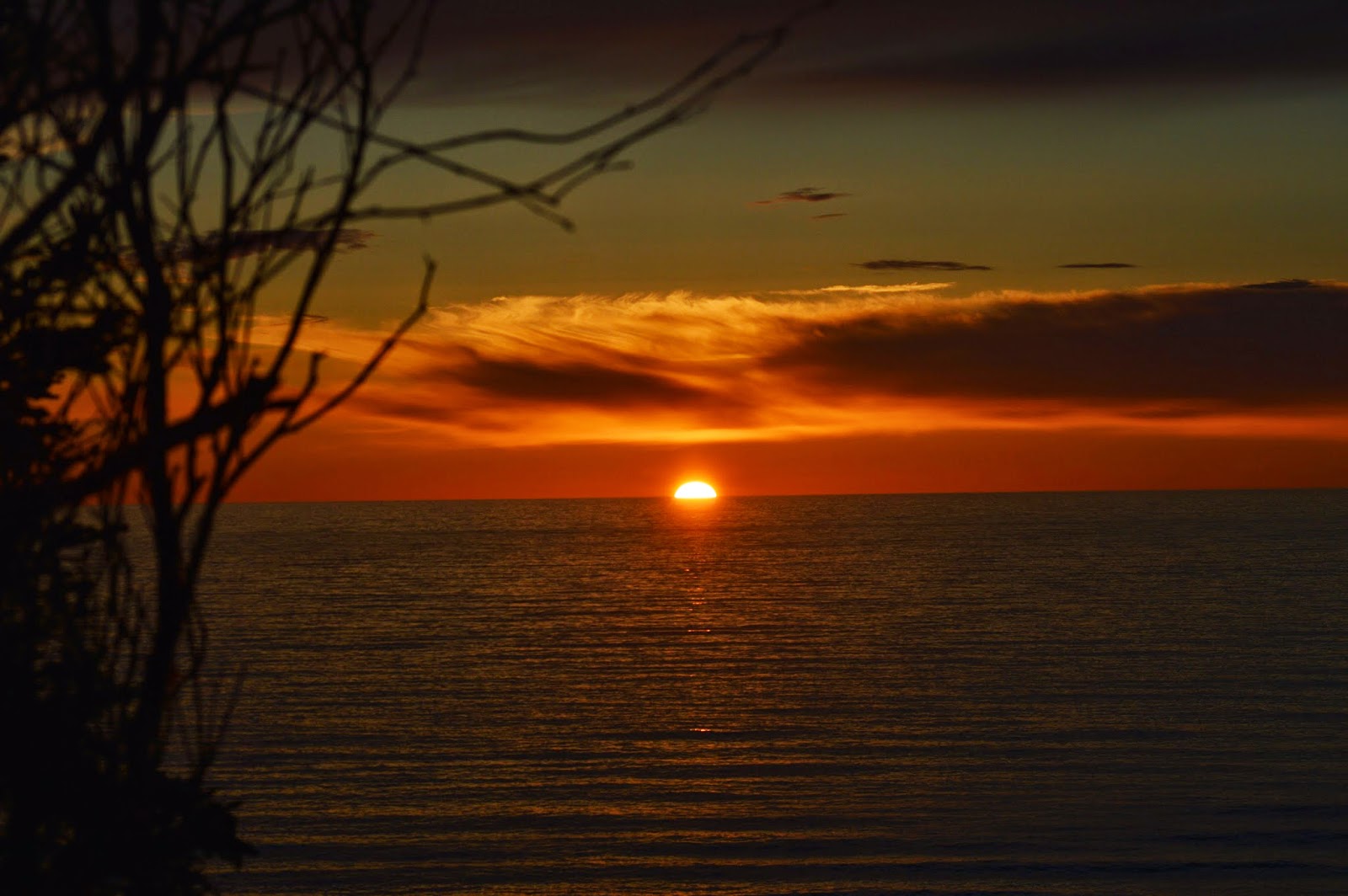 Today we head north to the Cabot Trail.

Quote from the week:  We have been watching the original Brady Bunch series as a family.  After a few episodes, everyone is naturally singing the famous opening theme song. And surely making the Canadians sigh at their American visitors in the RV;) One evening when the song ended, Anna blurted out "and IN COLOR!" because that is what it said on the screen.  We are pretty sure she hasn't yet been exposed to any black and white re-runs, but she sure was excited about color!

May God bless all with good health, safe travels, and much love in the coming week.