The 75 minute ferry from New Brunswick over to Prince Edward Island (PEI) was large and comfortable.  Traveling TO PEI whether by ferry on the SE side or the Confederation Bridge on the SW side is free. They charge to return to the mainland. 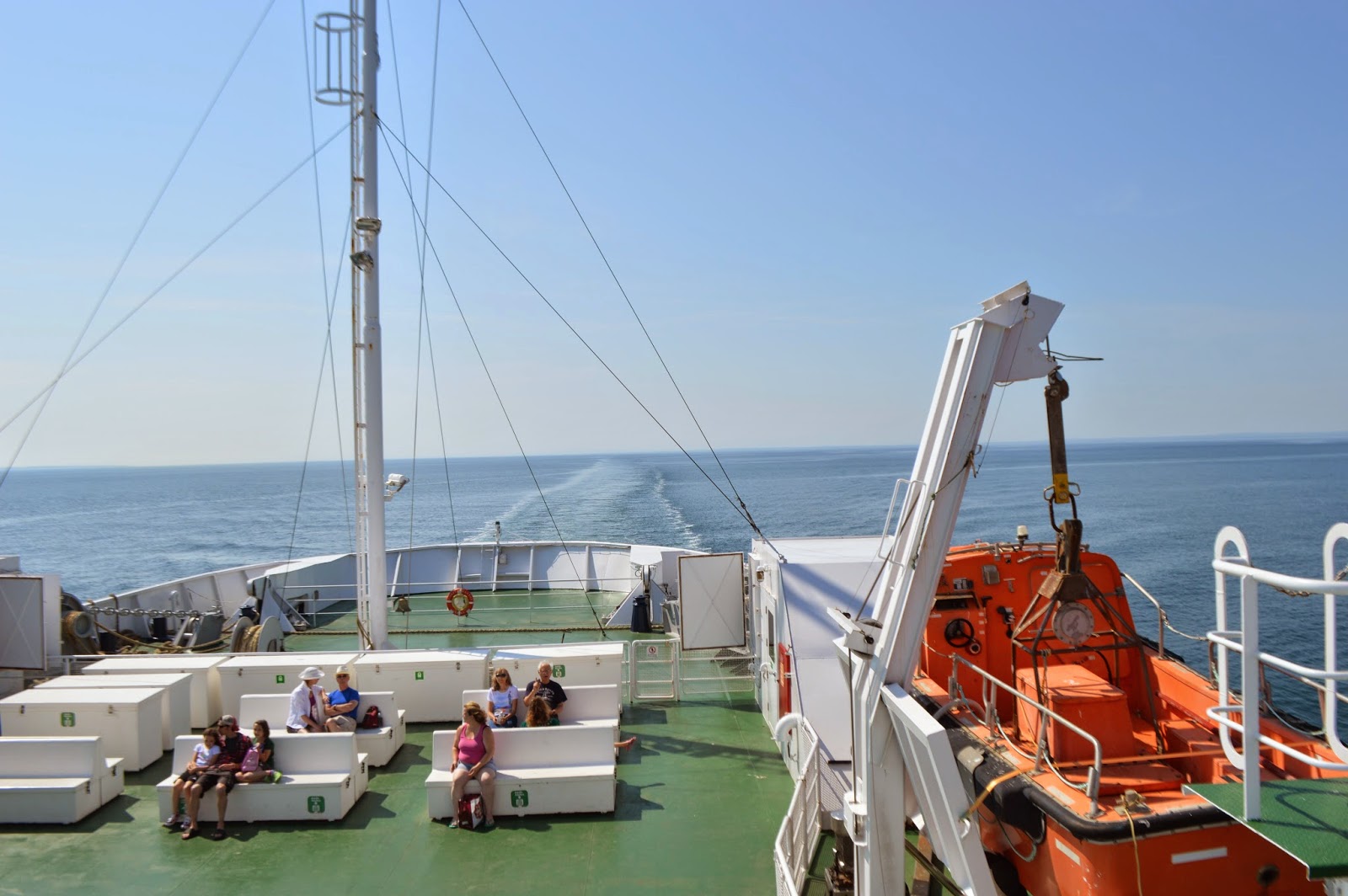 There is a very noticeable change in landscape from the lakes and hardwoods of NB or the granite of NS.  PEI is much more like the central US with lush farms and rolling hills.  The lupine flowers line the two lane highways in purple and pink. 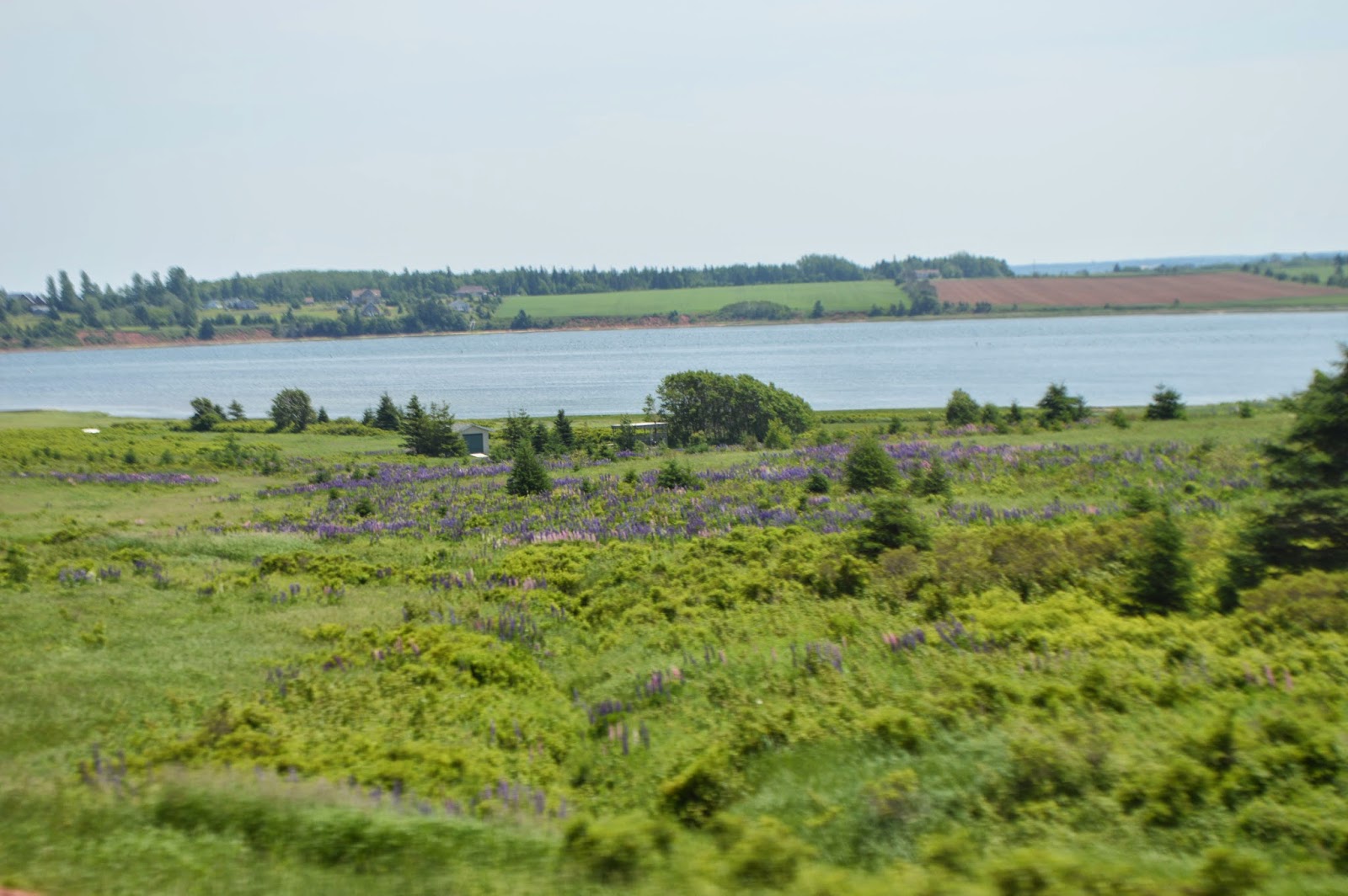 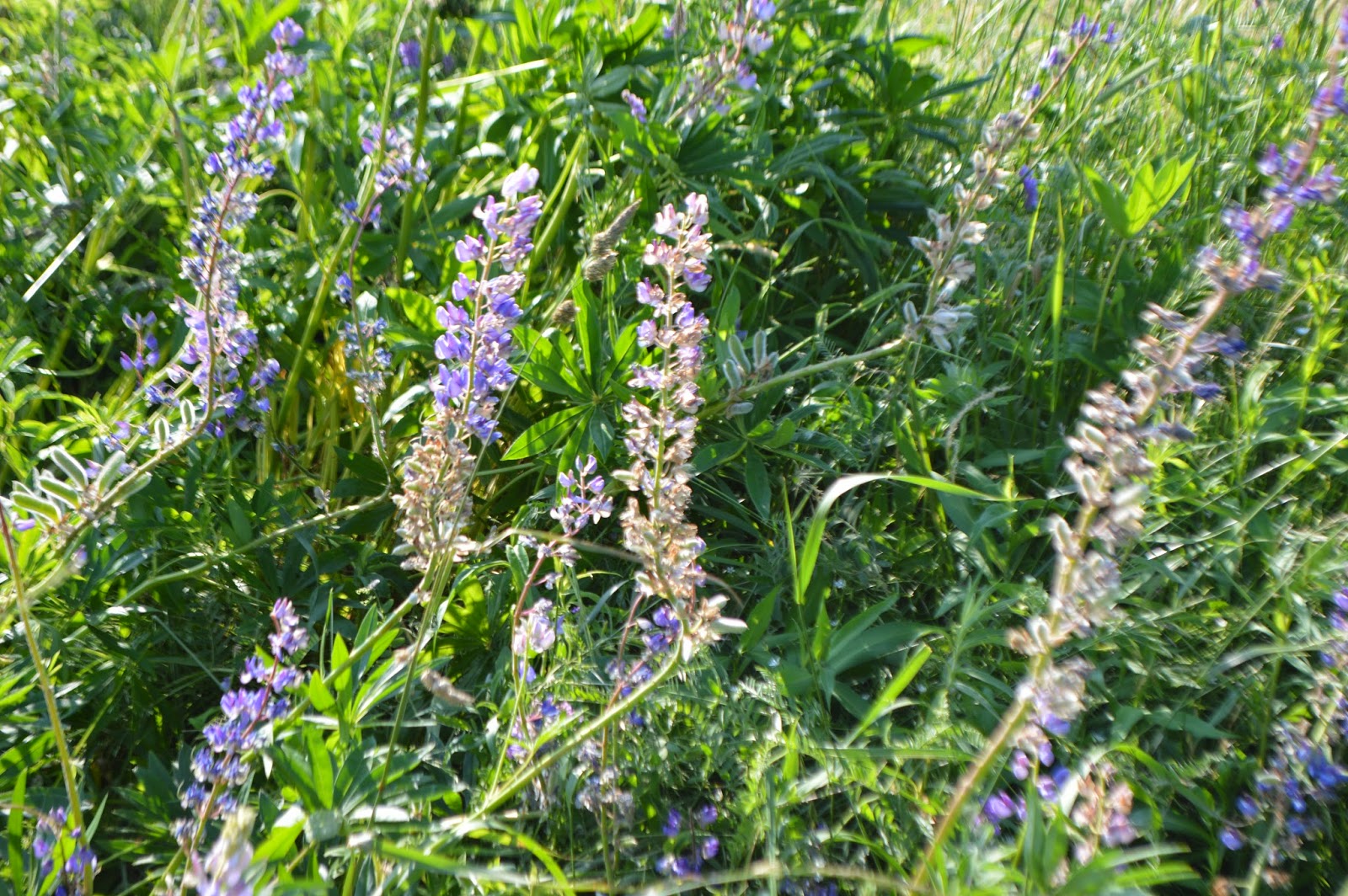 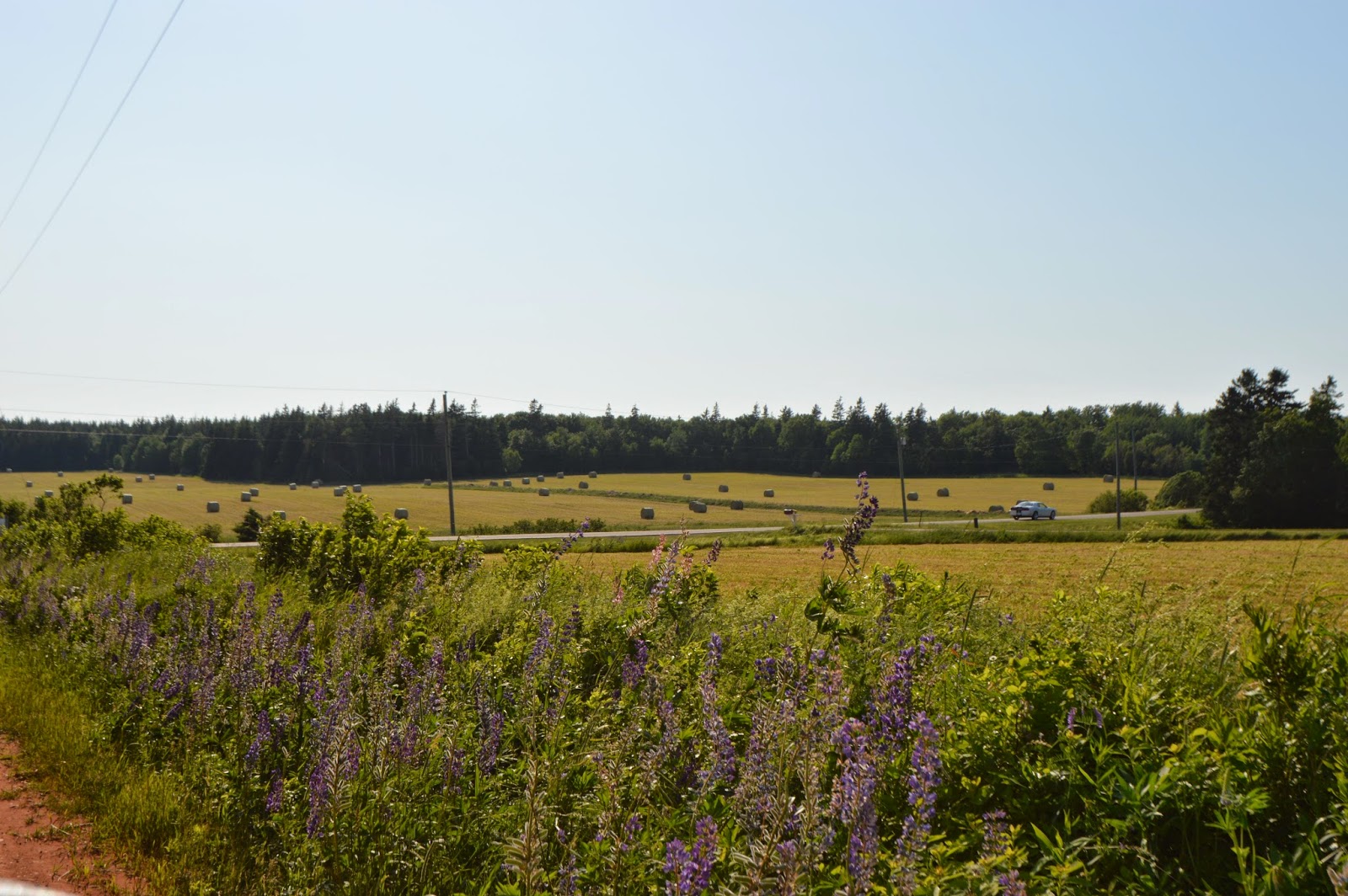 We stayed in the Prince Edward Island National Park Cavendish for 4 nights. This is the location that inspired L.M. Montgomery, the famed author of Anne of Green Gables. 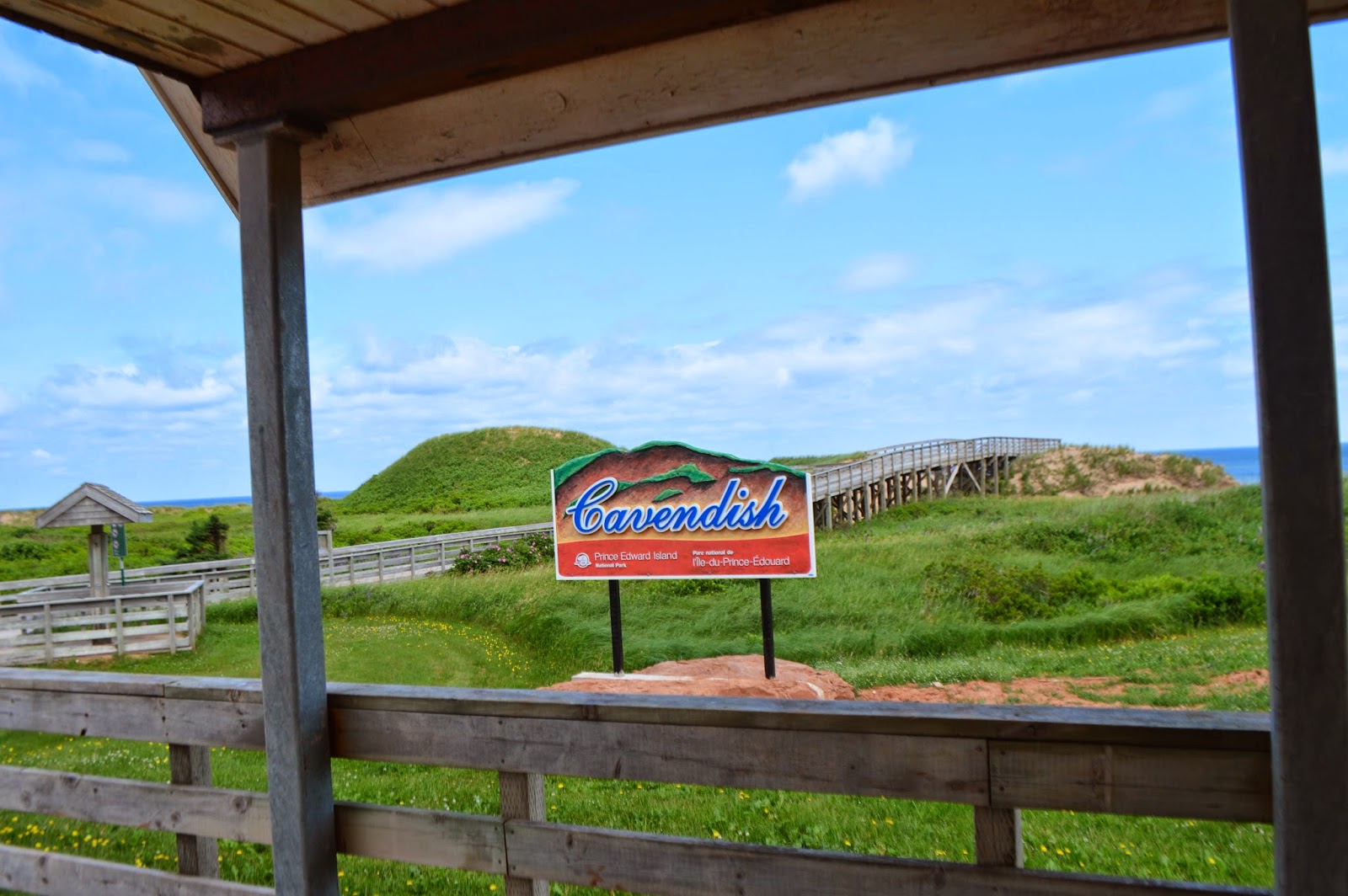 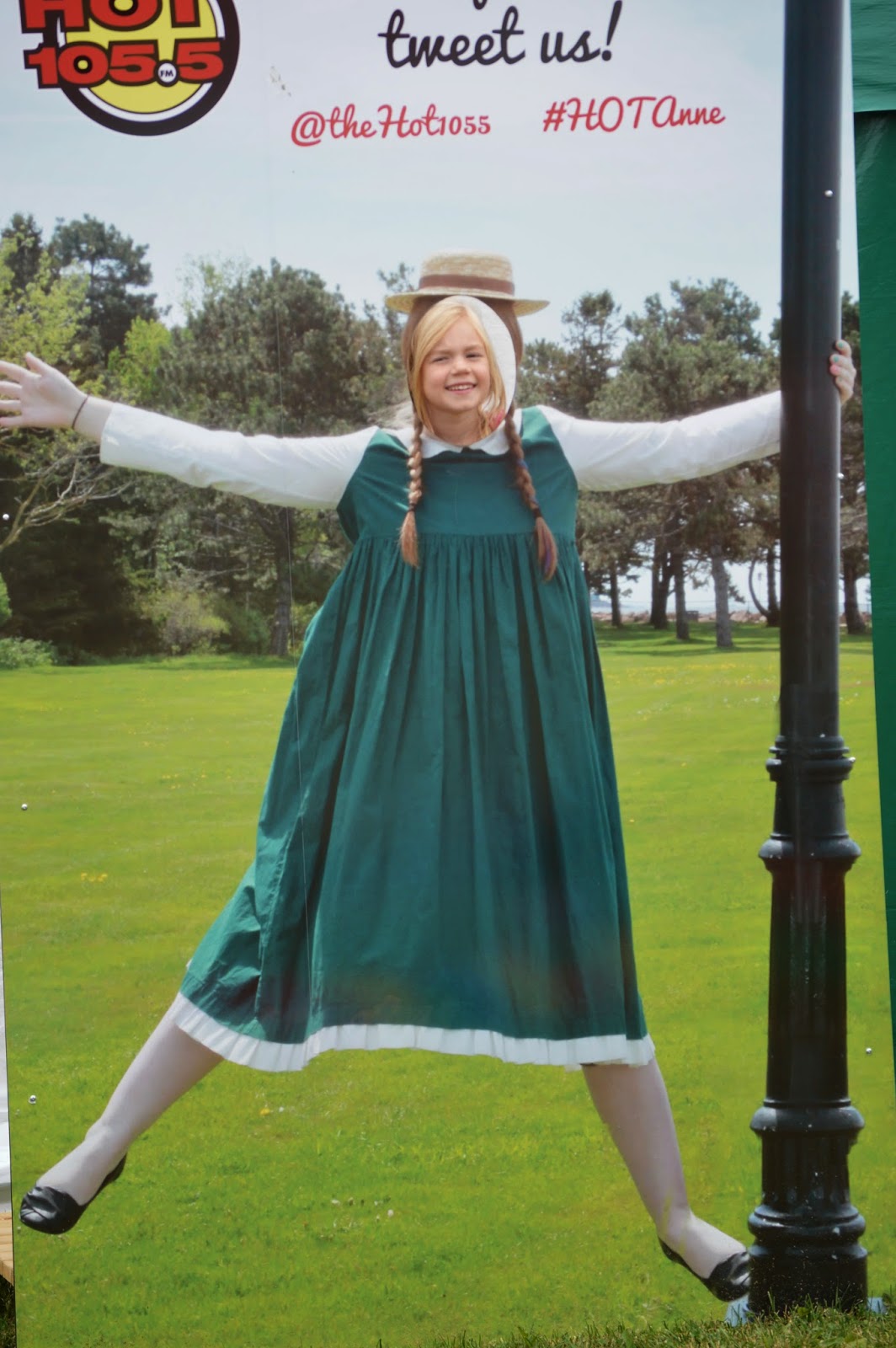 First we stopped at the Cavendish National Historic Site to visit this house that inspired the “romantic” descriptions in the book. 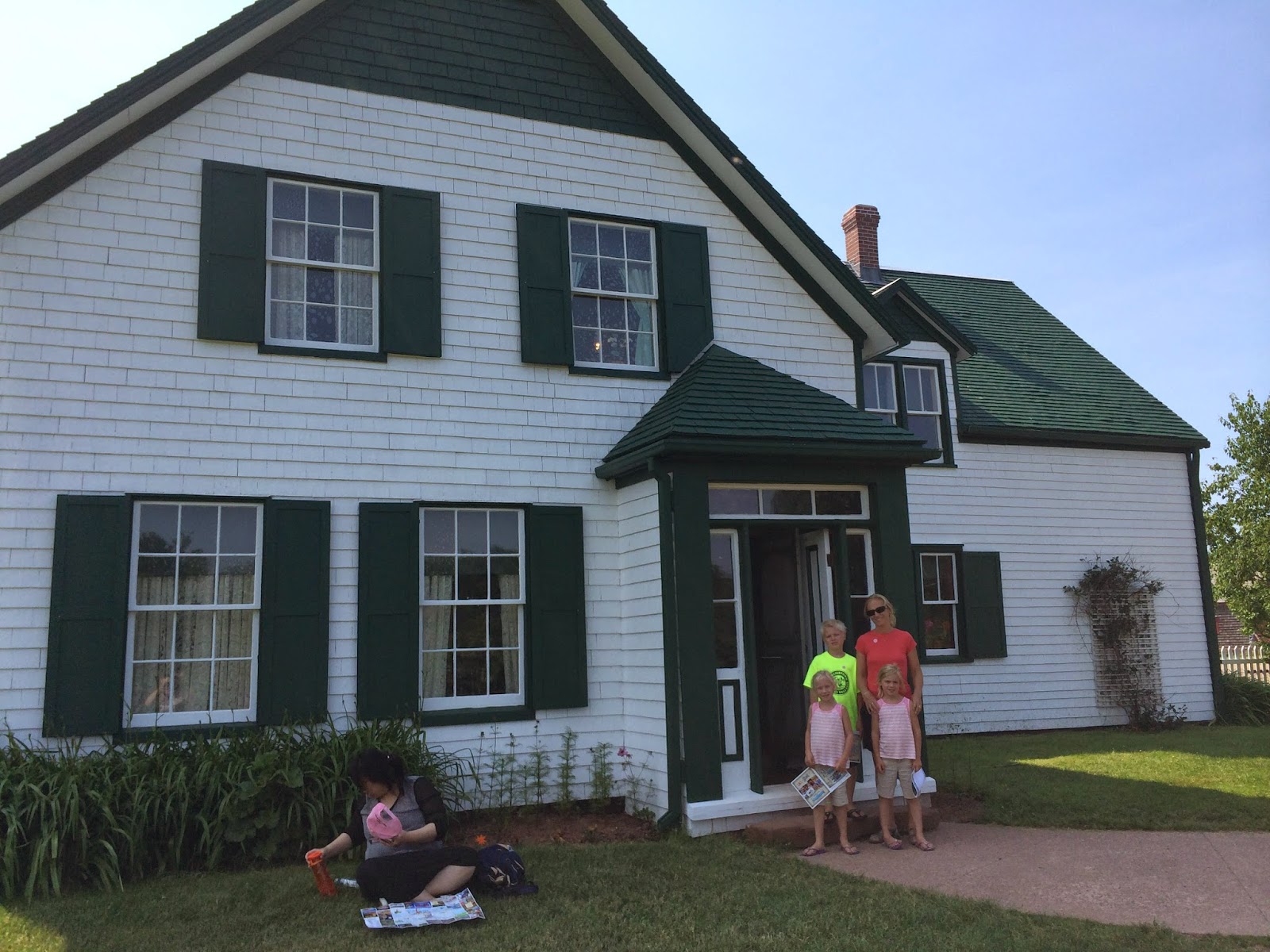 We finished reading Anne of Green Gables the morning of July 1st, Canada Day.  The Confederation Centre of the Arts was celebrating 50 years and we were able to get tickets to the opening day performance in Charlottetown.  It was very, very well done and will be a lasting memory for all of us of our time on PEI. 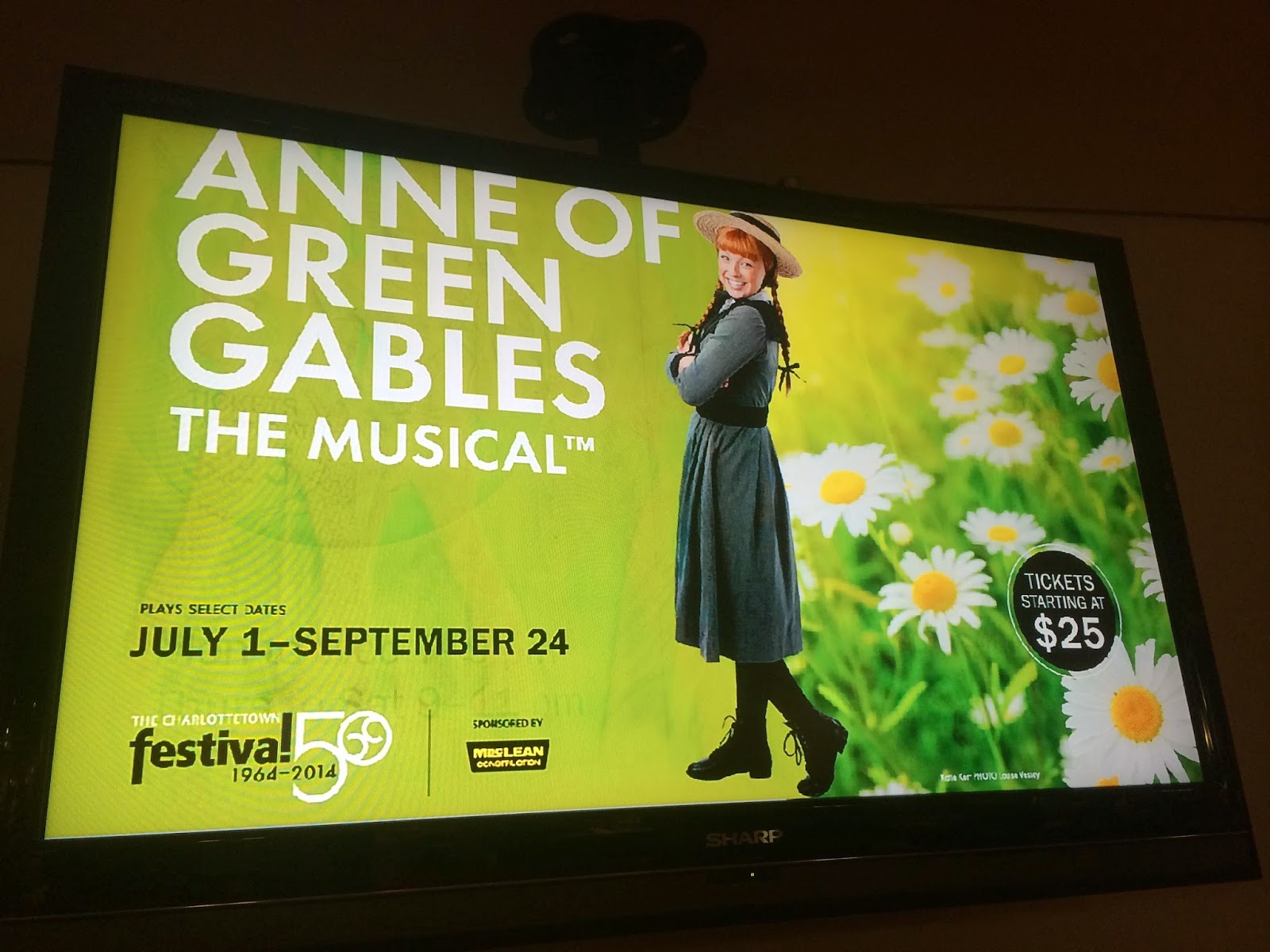 PEI has a summer long celebration for the of meeting of delegates that spurred the movement for a new confederation and  eventually joined the Maritime provinces with the Dominion of Canada (which at the time was Quebec and Ontario).  This meeting occurred 150 years ago in Charlottetown, PEI.

We watched a very talented group of young performers celebrating the cultural diversity of the country when we visited Charlottetown the next day. 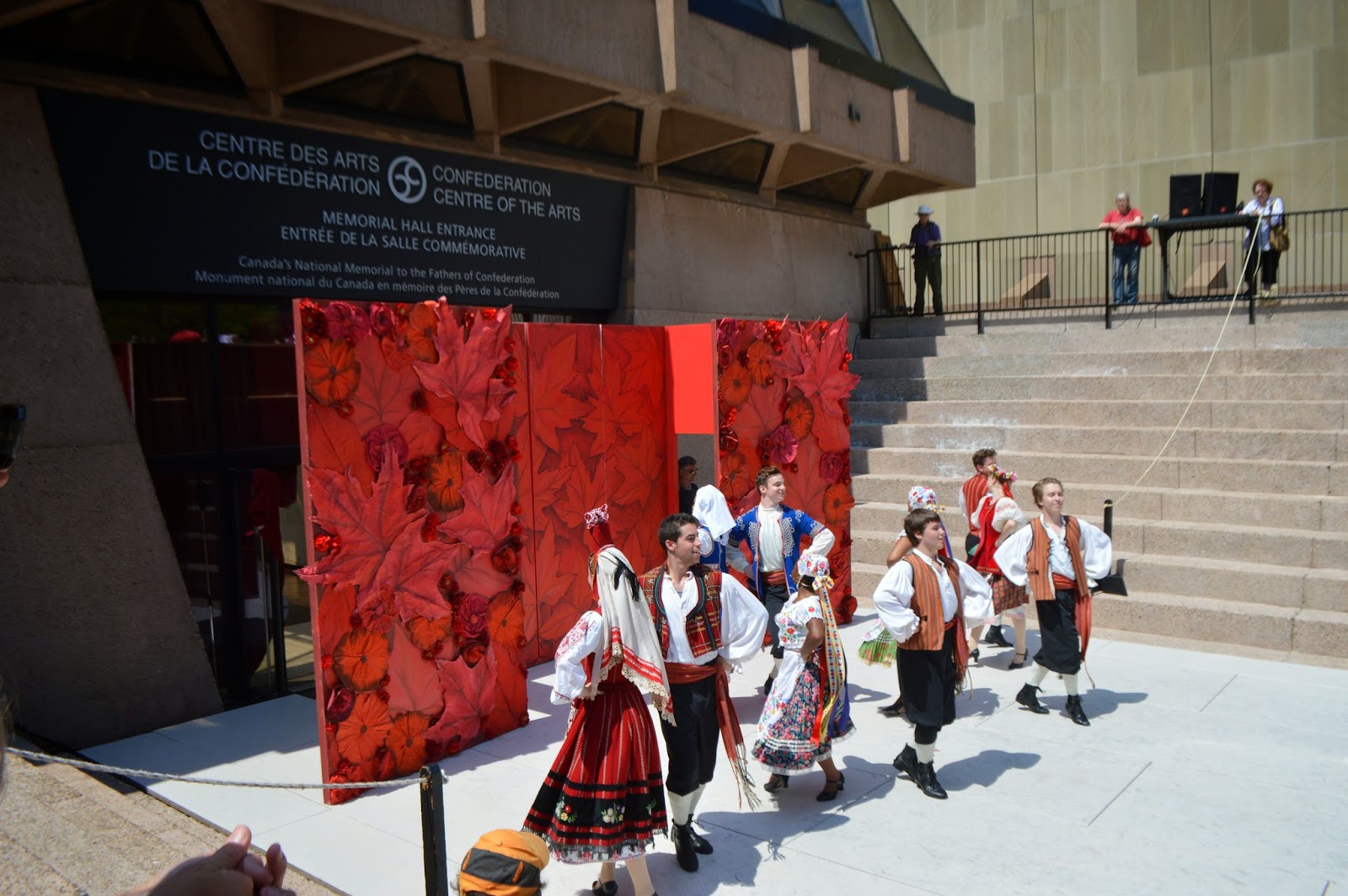 There was a large outdoor celebration area set-up for the summer. 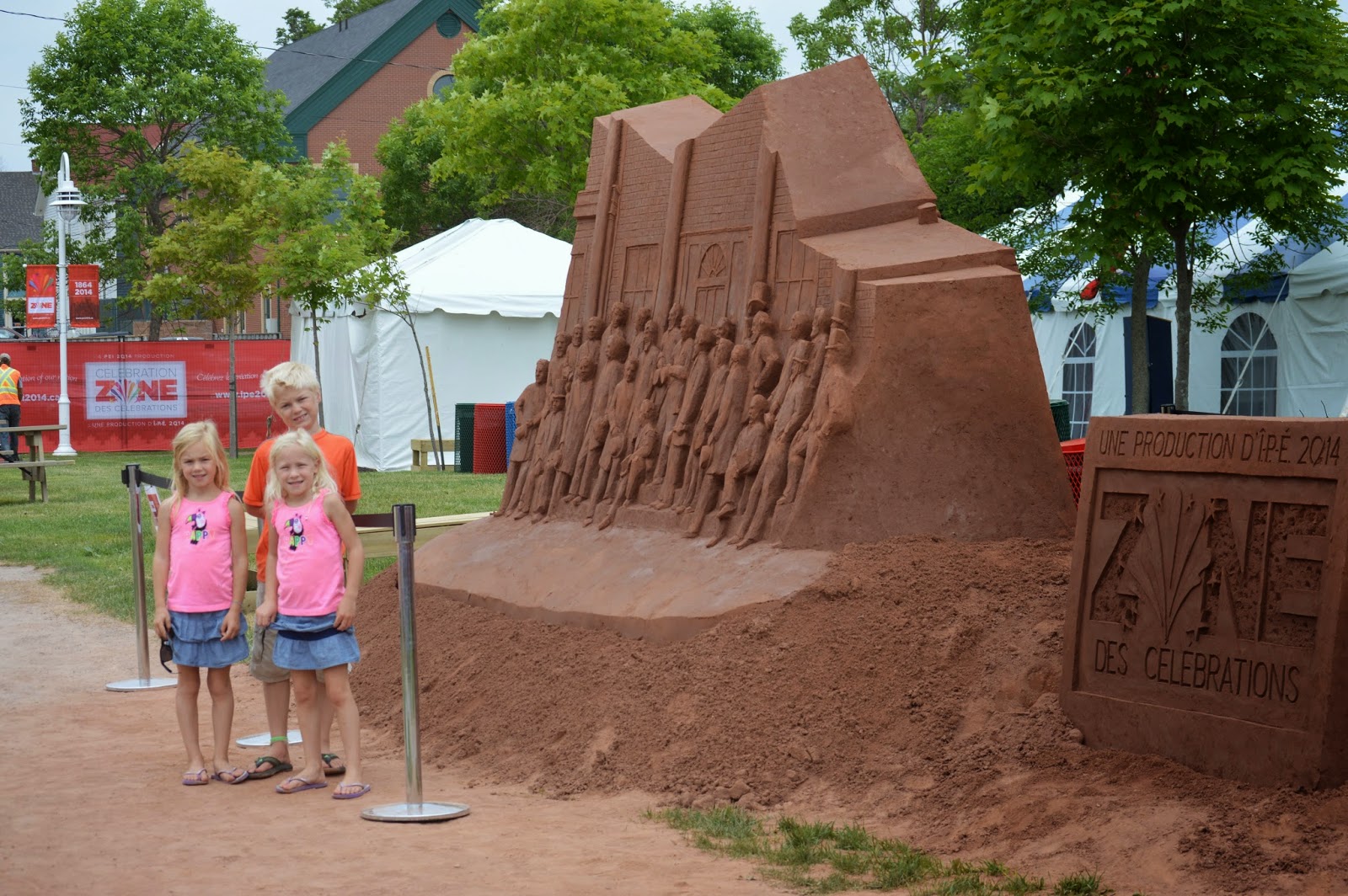 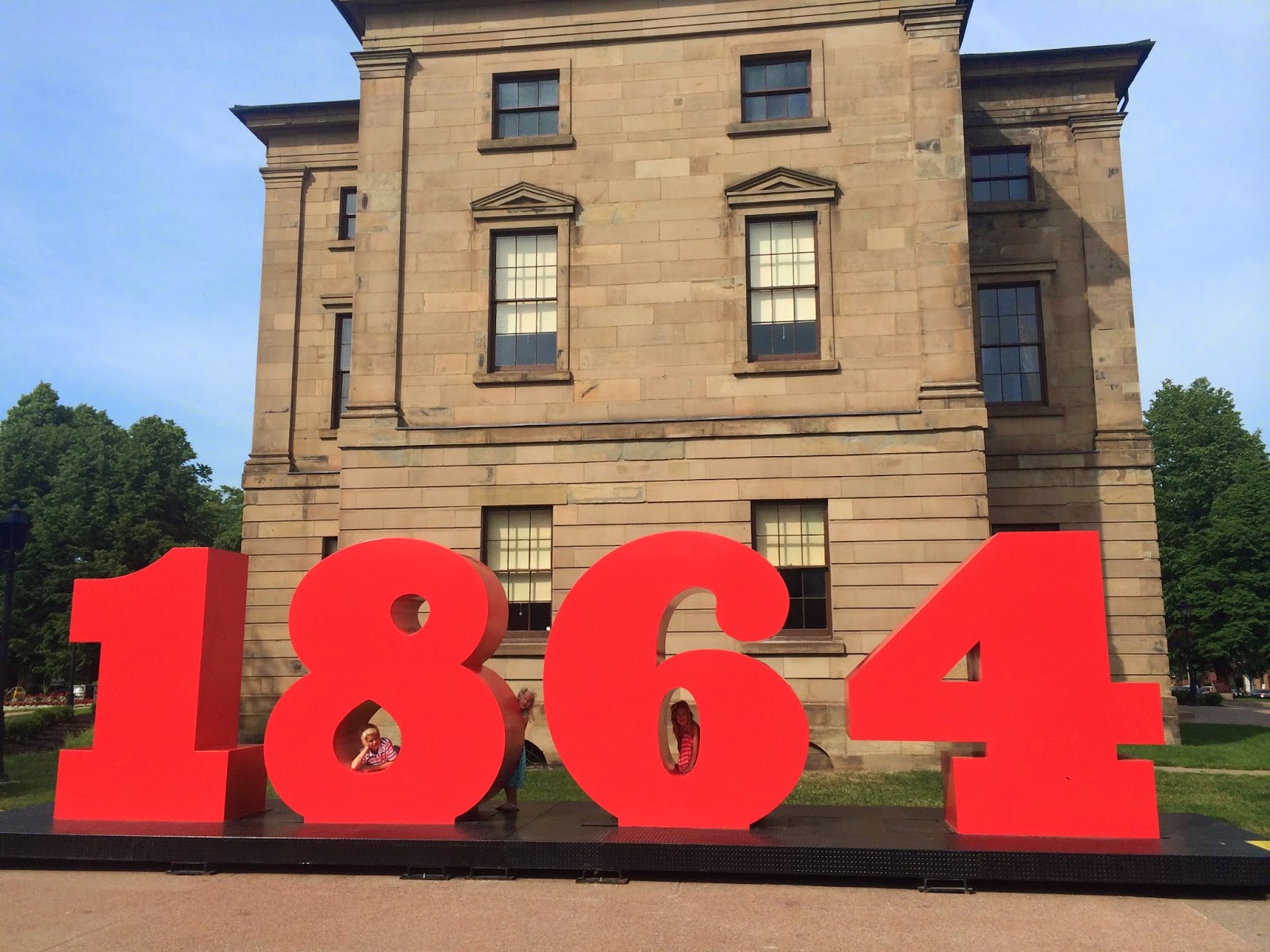 During peak lobster season, McDonalds serves lobster rolls!!  For $6.99 we had to try one. 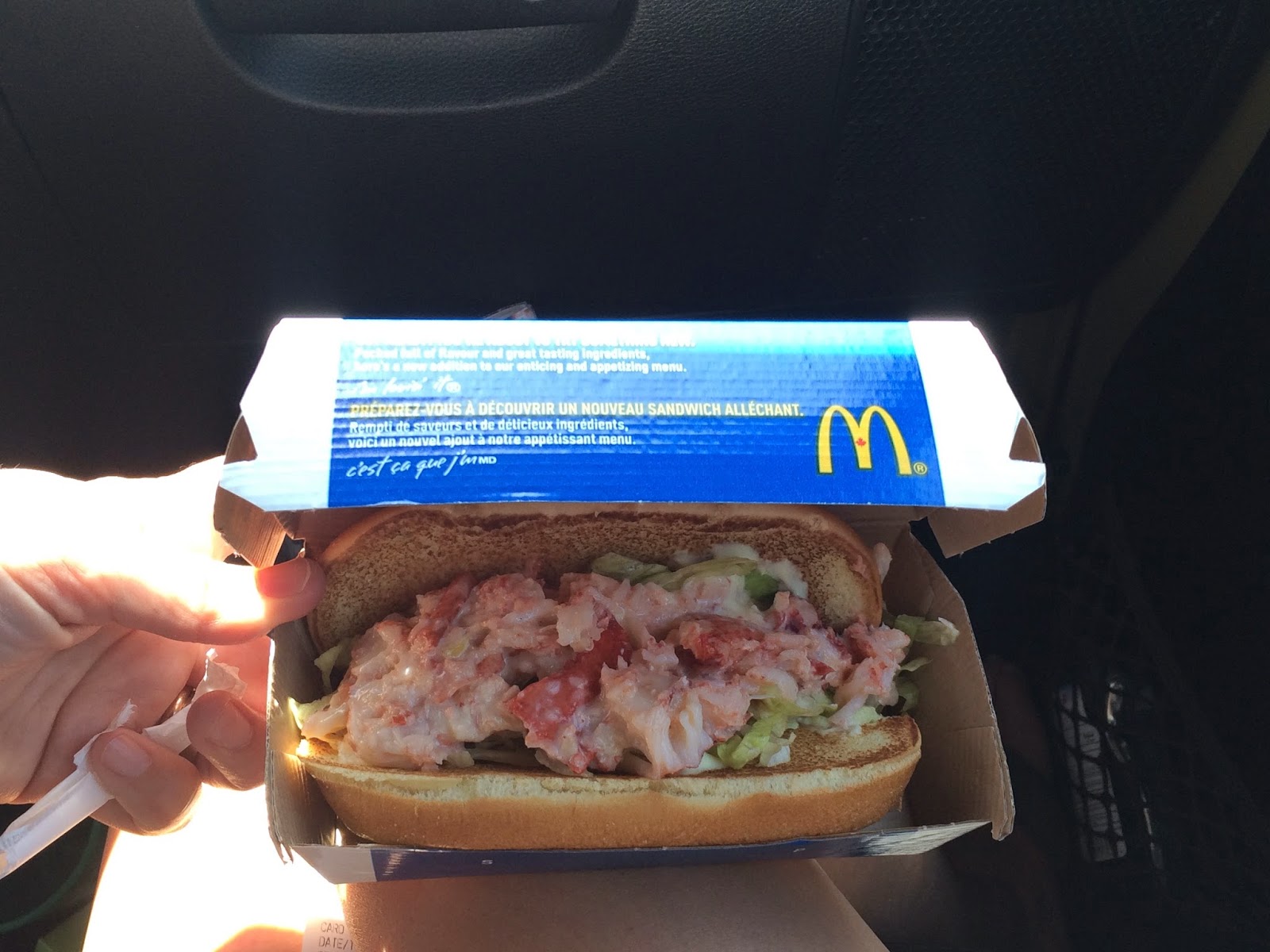 We washed down the lobster roll with a tasting at the Cows Creamery factory.  The ice-cream is very good but we wouldn’t recommend the tour which was mostly videos about T-Shirt making and cheese.  Anna loved all the cow paraphernalia of course! 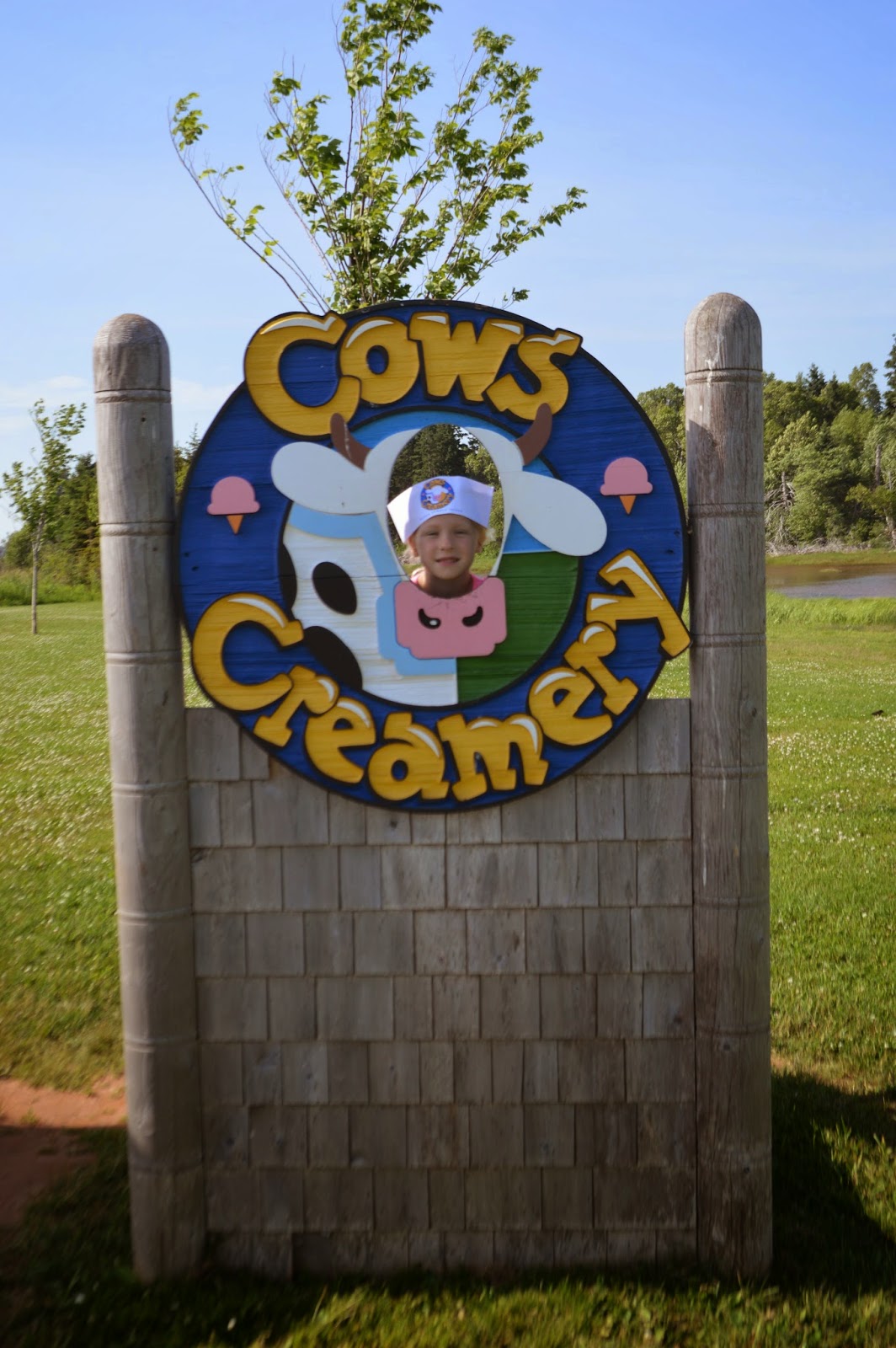 The weather was warm on our last morning and we spent time exploring the trails and sand beaches hugged by sandstone. 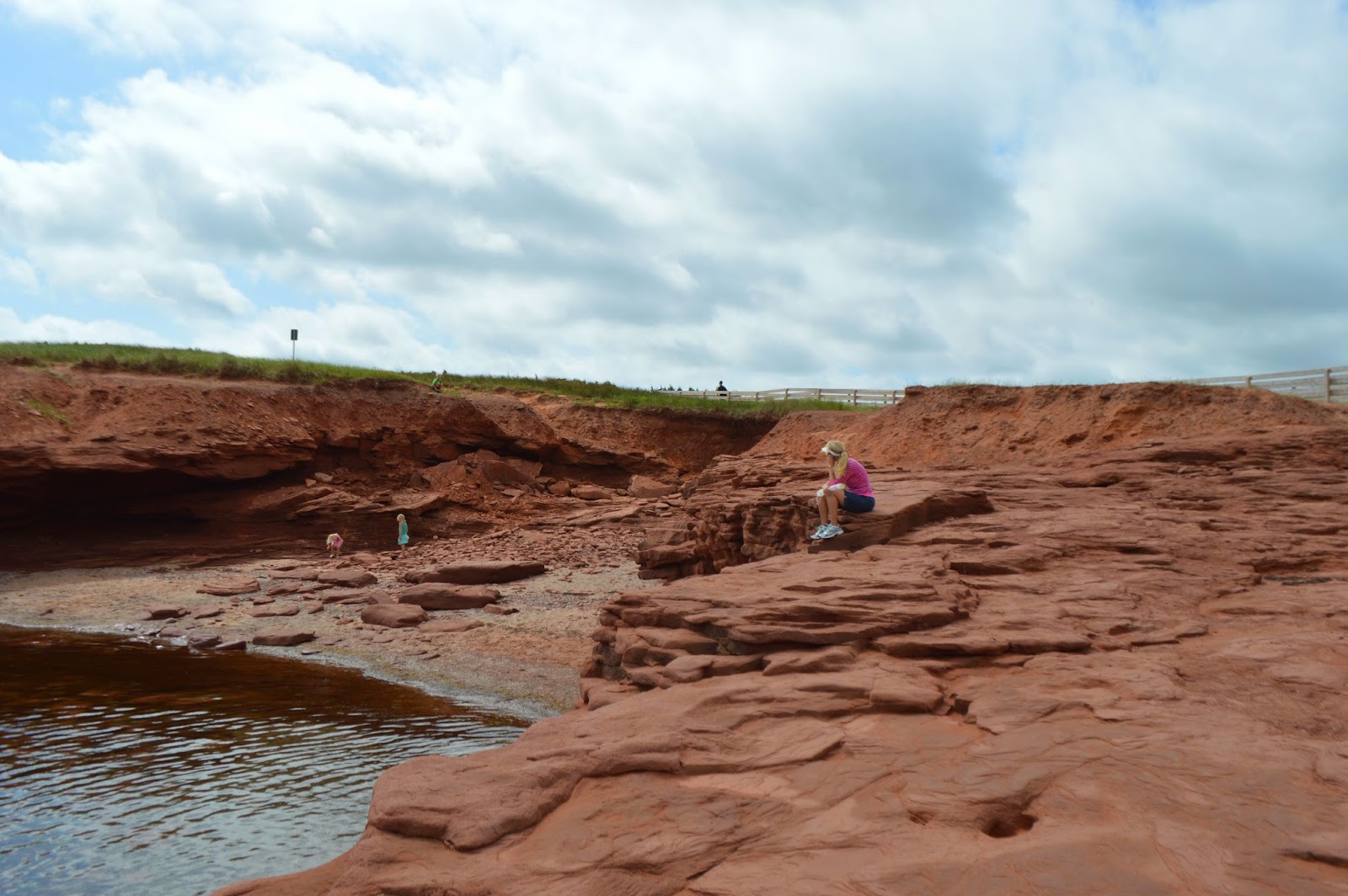 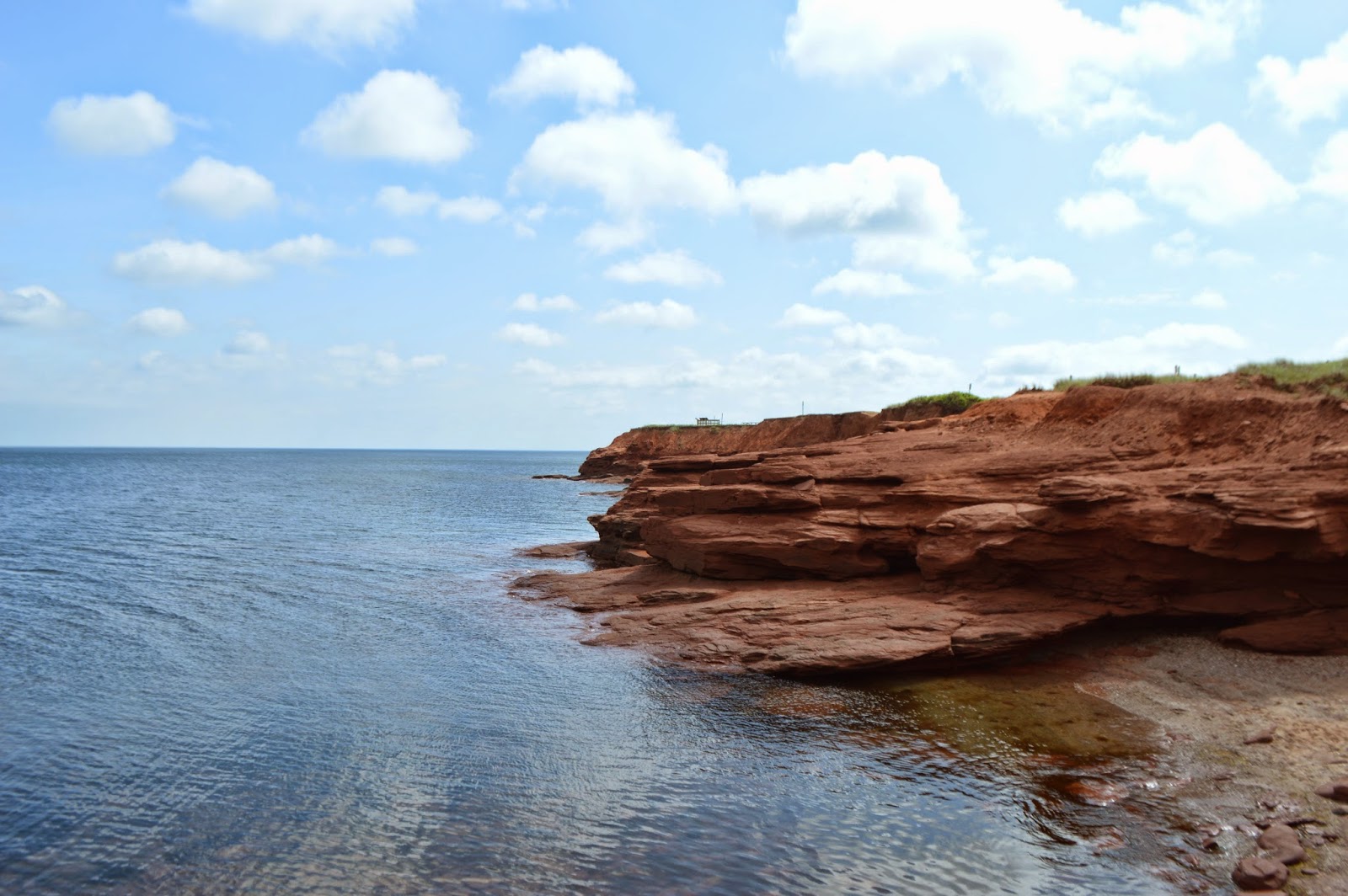 Friday, the day we departed, there was a very large outdoor country music festival starting.  Cavendish was filling up quickly as we headed in the opposite direction of the flood of traffic.  Sadly, we heard later that the premier acts of the show, Blake Shelton and Darius Rucker, would end up canceling due to topical storm Arthur hitting PEI Saturday.


We paid our $60 to cross back to NB on the Confederation Bridge. 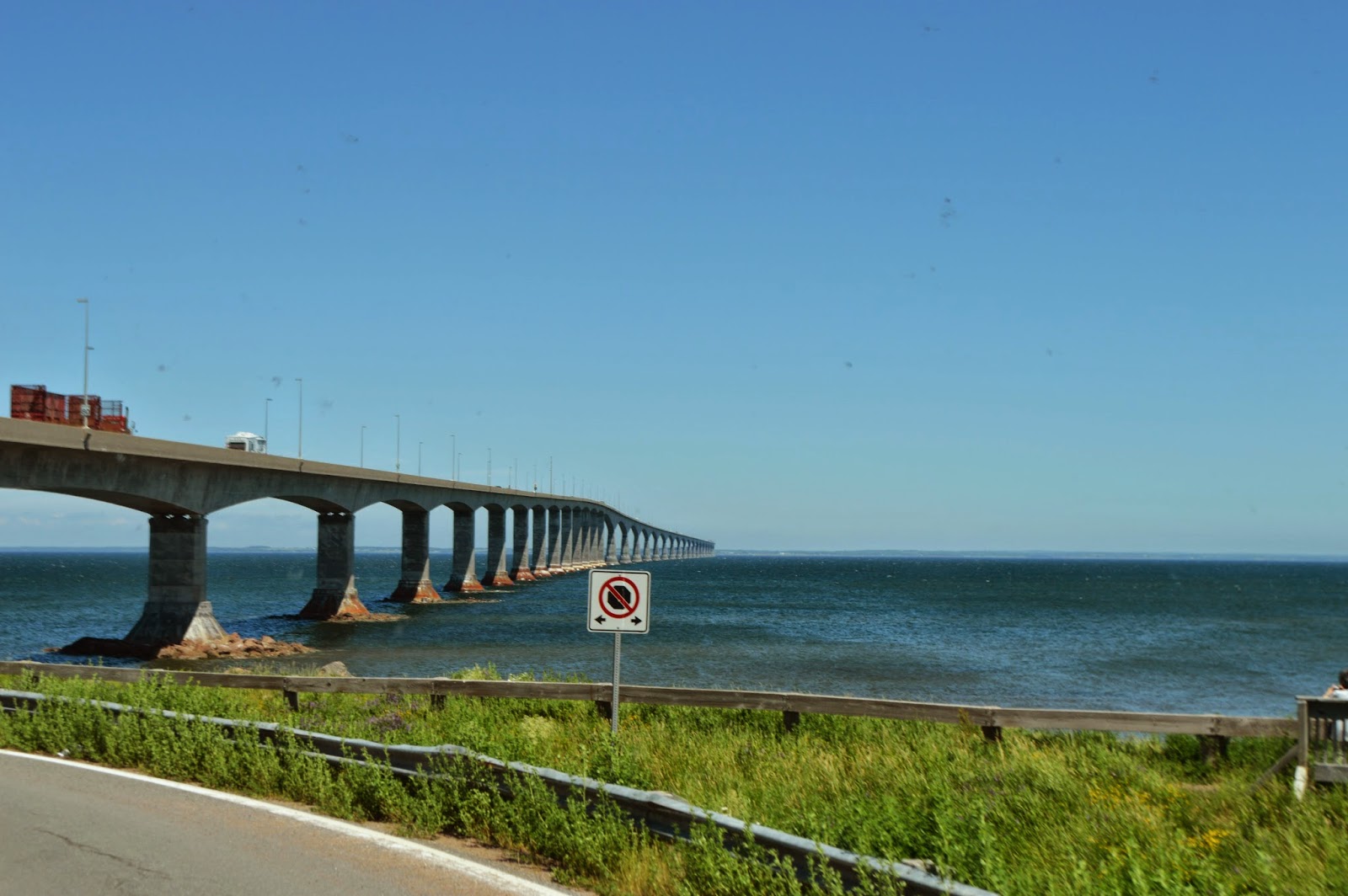 We made a stop in Shediac to see the largest lobster statute in the world.  We pulled into the lobster capital of NB just as they raised the prices from $4.99/lb to $6.99 for the weekend so we passed on more lobster. 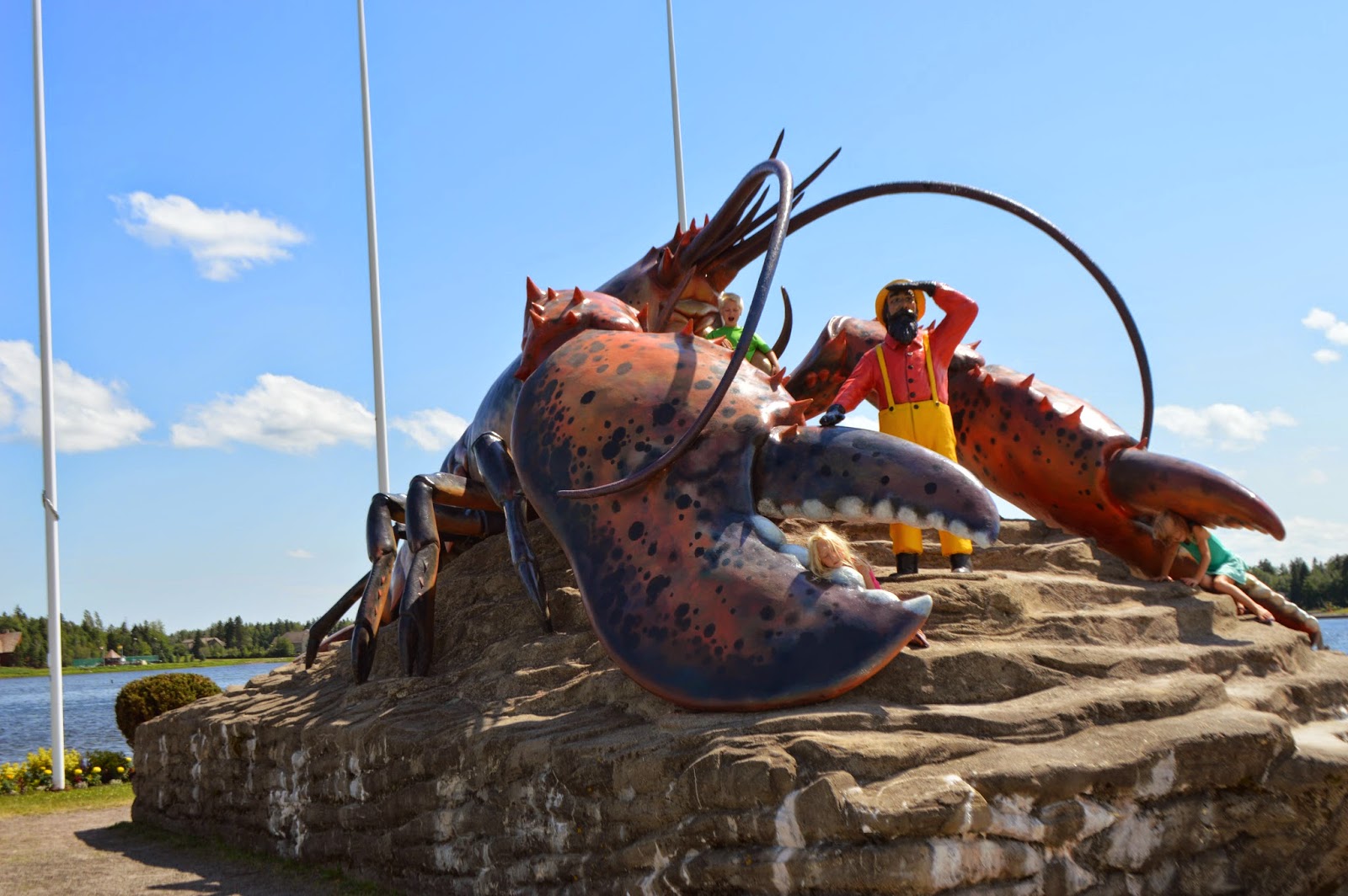 It wasn’t until we arrived at Kouchibouguac National Park when we found our first fellow Americans of the day and had a chance to give a hearty Happy 4th of July greeting.  We did a quick parade around thepark with our sparklers  - the mosquitos in PEI and Kouchibougauc are INTENSE! 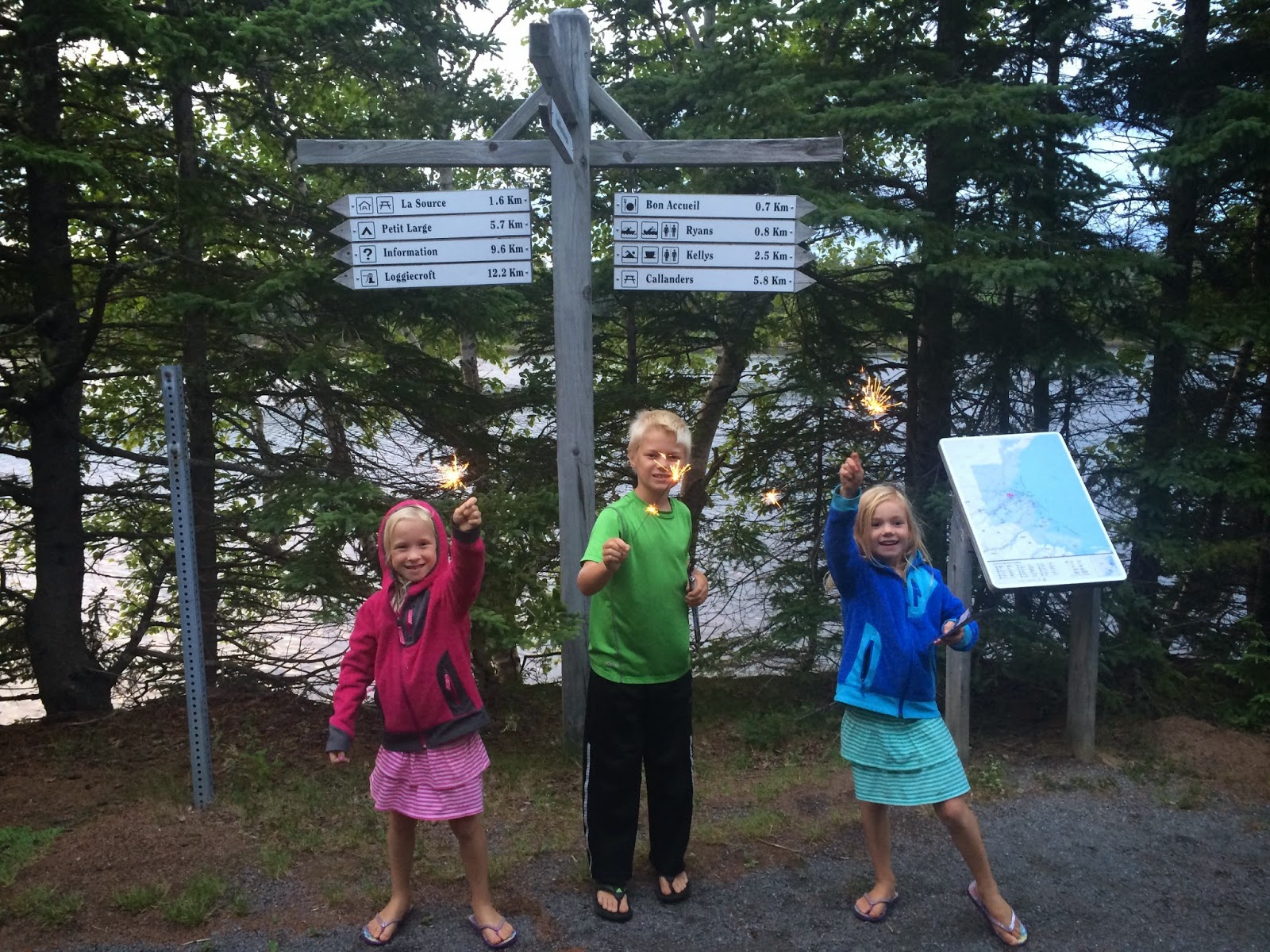 Early Saturday AM Arthur hit the Maritimes dropping 4” of rain and wind gusts of 116km/hr.  The park was fairly sheltered and did not have any serious issues.  But around 10am, the power (and water) went out.  Most of the eastern half of NB as well as the capital of NB was without power - 130,000+ people.


For us, it wasn’t much of a hardship because we have a generator and had filled our water tank. But for others in the park it meant heading home from their weekend trip early because there were no restrooms or water.  The visitor center was open so we completed the Xplorer program by window and flashlight, which was actually quite fun. 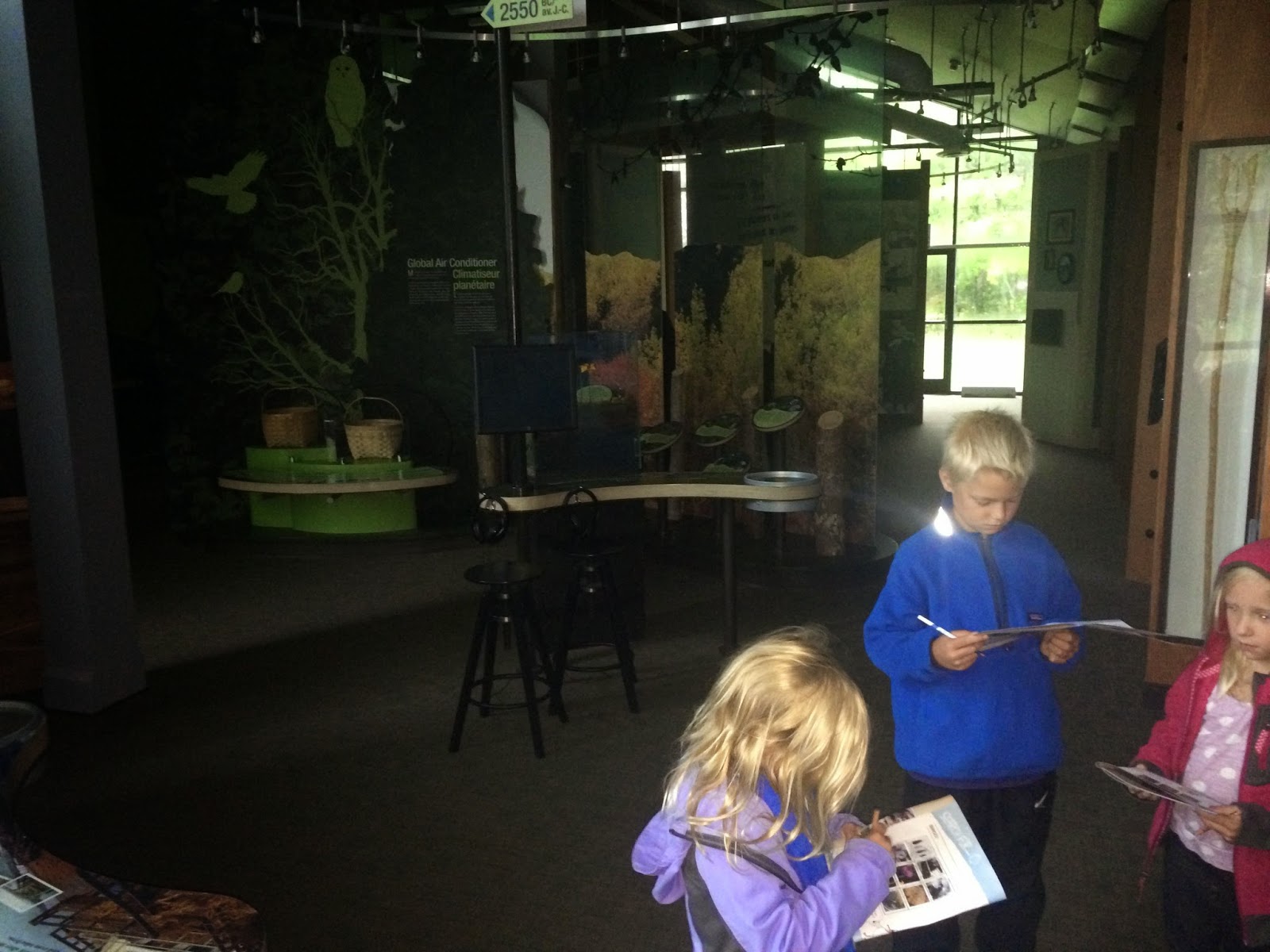 Mommy and Daddy celebrated 12 years of marriage on Sunday.  They are very cheesy and made us walk the famed Lover's Lane...and made us take a picture of them. For dinner we had fresh Halibut (grilled with olive oil, salt, pepper) and they opened their St. Clair wine from our time in NM (just outside Rockhound State Park) 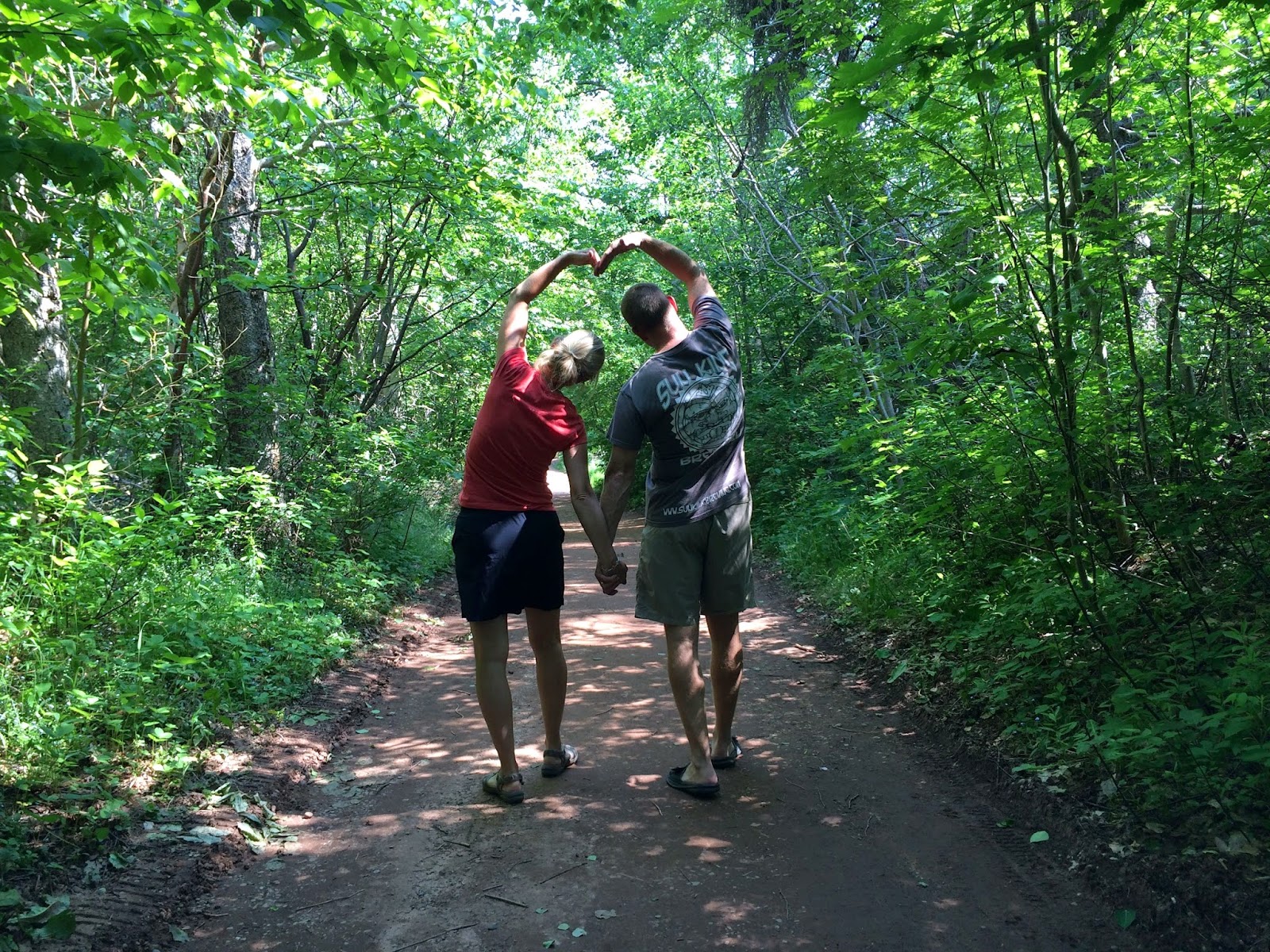 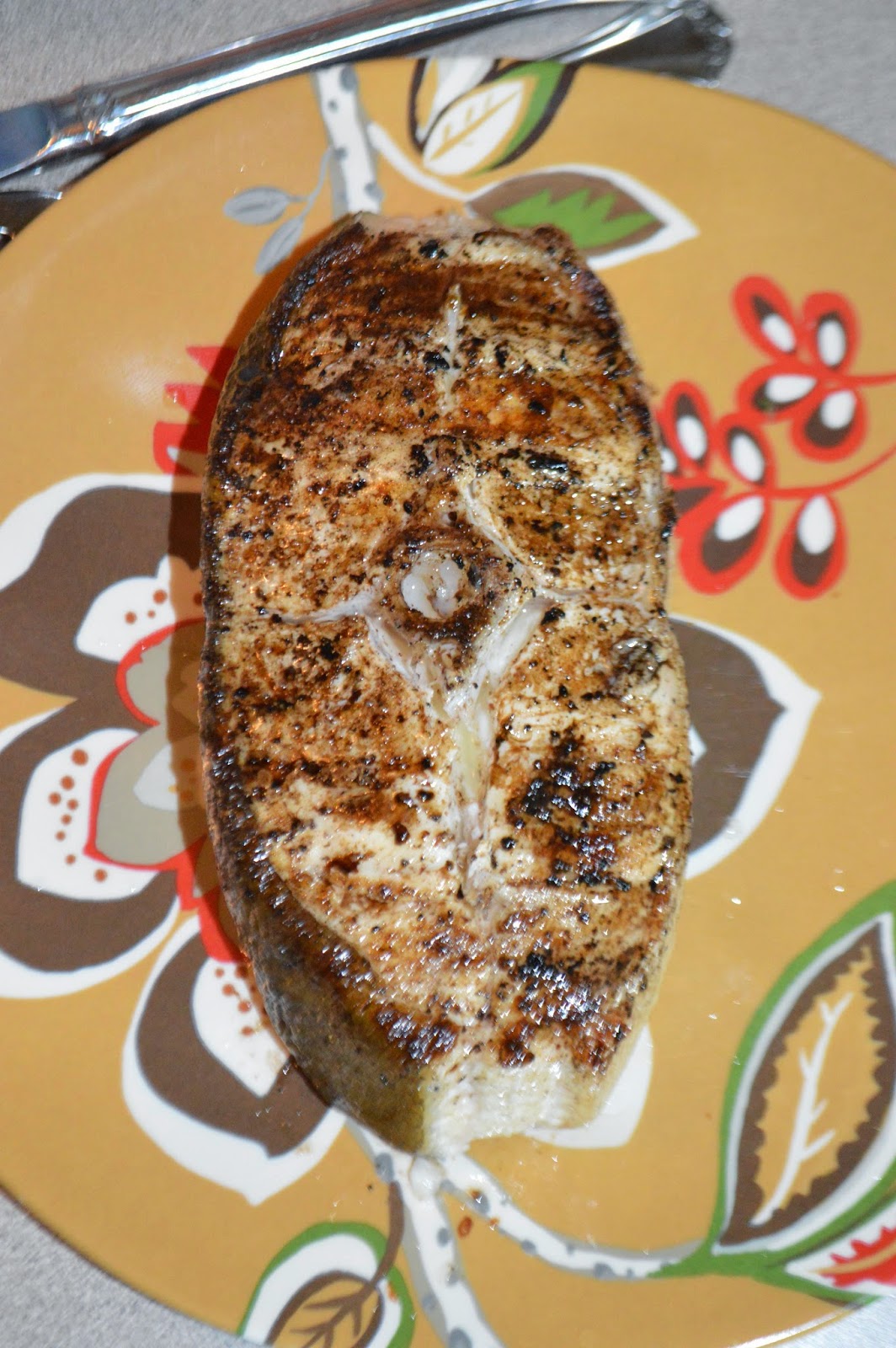 As of Monday AM, the power and water were still out.  The power company reported that most power in NB will be restored by midweek. The timing is good for us to relocate as we also are running low on water.

We will head north of the coast of NB and then turn west towards Quebec.

We wish you all a wonderful week full of good weather. God bless!