We departed from our first "real" campground today.  Once again, amazing weather for our drive to Cody, WY. 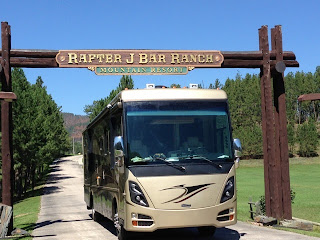 Coming into Devils Tower is an experience of it's own because you can see you destination long before you arrive.

We got very lucky when we foolishly bypassed the "long vehicle parking" and were able to drive all the way to the base of our first National Monument with Big County (per the recommendation of the park ranger at the base who most likely chuckled as we drove away). There are room for about 4 rigs on top and we snagged one.

There is a walk around the base of the monument that is about a mile and an easy walk.  From there, we saw multiple climbers ascending. NO THANK YOU! 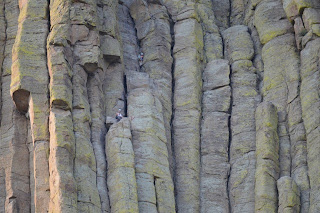 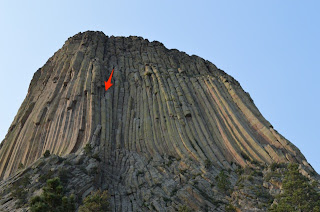 While hiking around, the kids accosted an extremely patient park ranger named Vicki.  She must have answered 50 questions - no exaggeration. The park rangers are SOOOO nice - and our kids are so inquisitive which is great. Katie's into asking questions that involve finding out if anyone/anything "in the whole world" has done or could do some superhero type feat.  Such as "Are there any kids in the whole world who could climb it?"  This leads to very interesting information. We found out there had been a 6 or 7 year old boy who had just climbed it (with a guide), and that the record for the fasted time had just been broken - 12 minutes!!!! Most experienced climbers take 5-6 hours.

And of course there are these guys everywhere. 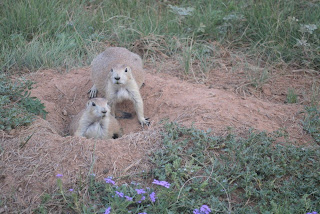 That night we made it to a Walmart in Sheridian, WY.  Met a couple who was returning from a trip to Brainerd MN.  He mentioned that we should be careful if we head west out of the southern part of Yellowstone because there are a couple highways that are very steep.  That got us thinking about our route into Yellowstone.  After reading about highway 14 going through the Bighorn National Forest being "white knuckle" we decided to backtrack 30 miles south and make the cross on highway 16.

Was a very beautiful drive.  The our peak elevation of the trip so far was the 9666' Powder River pass.

There are a couple turns in a section with 6% grade. To give you an idea of the magnitude of this range, here is a picture of a fellow RV'er across the way: 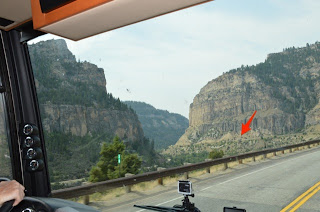 The next few hours looked something like this.  It looks like a place you want to go 100mph, but you think twice when you can watch your fuel gauge drop and remember that your windshield is as large and flat as a billboard. 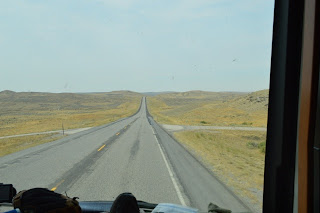 We actually made a reservation for this night.  It was our first experience in a park that is really meant to give you power, water, etc, but not somewhere you will take in any activites. You get a gravel pad and a small section of grass with a picnic table. But it was perfect for getting into Cody as it was only 1 mile from downtown. 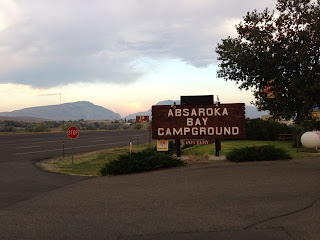 That night went drove into downtown to see a mock gunfight on the streets, and the Cody rodeo.  The rodeo was a big hit for all of us. 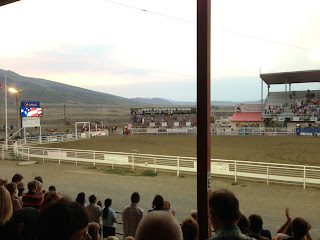 One of the more entertaining parts of the rodeo was the "remove the ribbon from the calf" event.  In this event they invite all kids into the arena and they release two calfs with ribbons taped to their backs and the kids have to chase them down.  What you'd expect is a pair of tiny little calfs to come tripping out and the kids to maul them.  But no, this is Cody and they teach kids to grow up to be men and women. When they open the gates, two animals as tall as many of the kids and twice as fast as a greyhound come blasting out!  You can't tell if kids are chasing or running scared, but it's extremely entertaining to be in the stands.  At one point, one of the little bulls up-ended one of the larger kids and momentum alone carried the boy 20' on the back of that calf as the crowd gasps.  He was fine and got up to chase after that flag again. Glad to see there are commercial endeavors that can still put on a show and teach kids life without having to pad their walls to allow entrance.

The second great part of that event was Katie's shirt upon return.  Remember, this is an arena floor that had dozens of horses and bulls parading around. Katie had a large wettish green stain on her shirt (forgot to mention, the rodeo clown had the kids "stretch" before the flag event and that involved laying down and rolling on the dirt floor for his entertainment).  Upon pointing out the new stain and what it might be, Katie promptly put it to her nose and proclaimed "Nope, it doesn't smell bad."  Now that was funny to us, but what then happen was classic. She turned to her brother and held out her shirt and said "JAK, you smell and see". And he did….poor guy:)

Ok, this is getting a bit wordy so let's move through the rest of WY quickly even though it deserves more.

We went to the Buffalo Bill Center for the west.  This is actually 5 different museums. It's awesome and we'd highly recommend taking your kids.  It's large, but boils down the very expansive exhibit exhibits into small, large print, or interactive pieces. 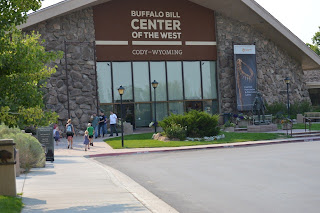 And we saw the raptor show. 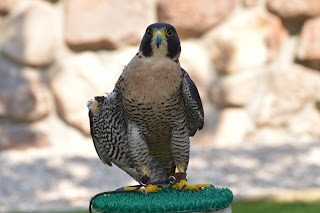 One of our 'goals' for our trip is to cook at least one "local" dish in each state/area that we visit.  We sorta skipped doing this in SD, but will use the excuse that we were getting used to the kitchen.


A good friend sent us a true WY recipe which was excellent.

Heat a cast-iron skillet over medium-high heat. Sprinkle meat tenderizer over beef cubes, and cook in the hot skillet until browned. Drain off any excess juice. In a small bowl, mix together the chicken broth, cream of chicken soup and onion soup mix. Pour over the meat, reduce heat to low, and simmer for 45 minutes.

Preheat the oven to 350 degrees F (175 degrees C). Add the frozen stew vegetables to the skillet, and simmer for 10 more minutes. Unroll the crescent roll dough, and arrange to cover the top of the pan like a pie.

Bake for 10 to 15 minutes in the preheated oven, or until the top is golden brown. Remove from oven and serve. 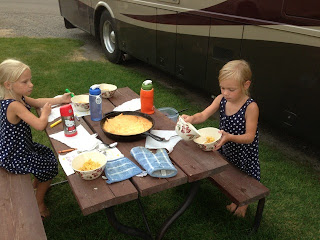 The drive into Yellowstone from the east entrance is wonderful.  The drive before the park is actually as good or better than that initial part of the park itself. 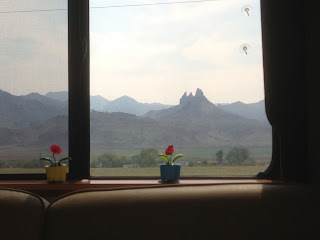 Upon entering the park, we were immediately blessed to have a wonderful park ranger who pointed out that our passenger side mirror was about 1/2 inch from the roof of the far pay booth.  I guess it's a test to see if you will fit. Rookie!

We were not far into the park when we saw our first 'bison bison' (the scientific named we learned) on the road.  This guy wanted to come in and visit. 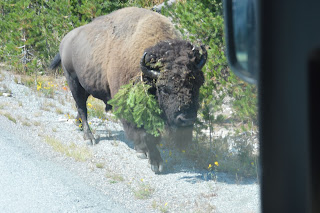 The kids played on the shores of Yellowstone lake.

The next day we did one of the main loops in Yellowstone.  Pictures are better than words 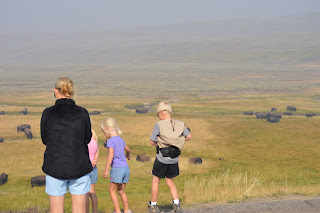 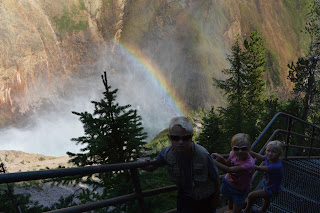 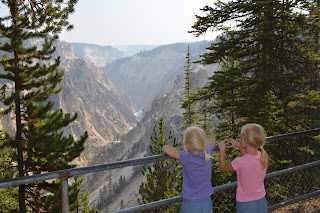 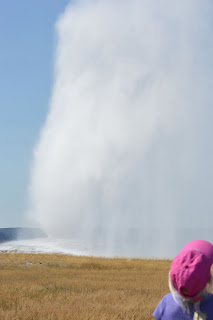 The Yellowstone educational centers are amazing.  We learned that when the area was first explored/documented for the world to see, this picture was painted by Thomas Moran: 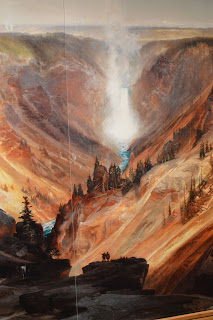 And you can go to Artist Point and take the same picture (but in much less time and on fully paved trails;) 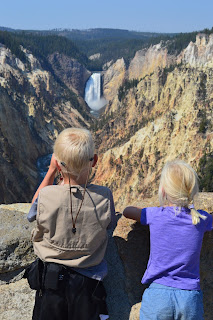 You may have noticed the smoke in the lake picture.  There were 5 fires burning in Yellowstone when we arrived.  The park service was extremely proactive in getting information to visitors with check/info stations set-up on the road.  There was a rumor the first day that they were going to evacuate part of the park and the privately run stores even closed.  But outside of some roads being closed, we felt very comfortable and enjoyed our time immensely.

Here is an example of what the smoke can do the sky - these were taking at same time, just turning 180 degrees: 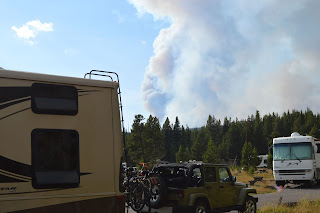 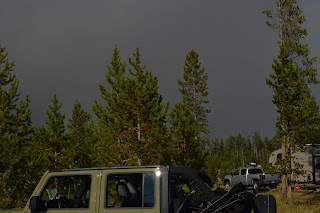 We also met some fun people. At Old Faithful we sat next to a couple who lived less than a mile from our Indiana home.  Then at the camp site, we met a great couple from NJ with twin girls. The interesting part about meeting them is that we saw them 4 different times between Cody WY and Yellowstone before noticing they were camped next to us!  They graciously invited us to have smores on our last night in Yellowstone.

The wonders and works of God are obvious at every turn in Yellowstone. Keep those fighting the many fires in and around the area in your thoughts and prayers. We saw lines of young men and women heading into the forests. The weather continues to be perfect for us (sun every day), but not for that area.

Off to one of the greatest states in the land - Montana!!